Alan Thicke had an all-star send off during his memorial service. On Sunday, 300 of the Growing Pains star's closest family and friends gathered at his home in Carpinteria, California near Santa Barbara, for a heartfelt memorial service.

Alan's three son's Brennan, Carter, Robin, who acted as MC during the service, and his wife, Tanya Callau, were surrounded by a host of celebrities who shared memories of the late star over the years including, Bob Saget, Kris Jenner, Alex Trebek, Bill Mahr and Rob Lowe. In addition, Alan's onscreen family from his hit '80s sitcom Growing Pains, Joanna Kerns, Kirk Cameron, Tracey Gold, Jeremy Miller, and Leonardo DiCaprio also made the trip. 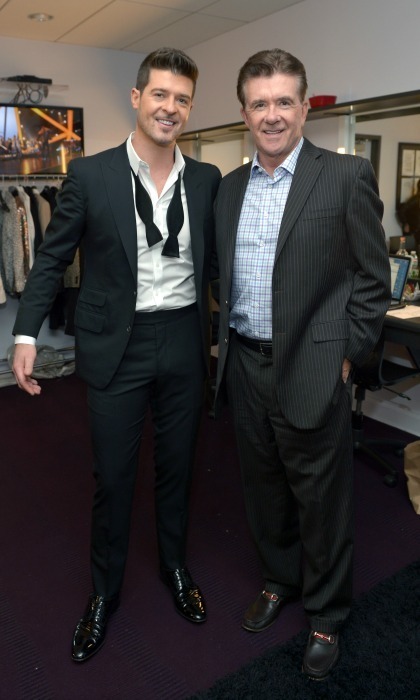 During the light hearted service, guest were seated at various tables complete with place holders featuring quotes from the Hollywood veteran. Alex Trebek, who is a fellow Canadian and longtime friend of Alan's, gave a speech about how the star helped him get his start in Hollywood. Bob Saget took to the podium for a comedy set in his honor, as Alan's son Robin kept the mood upbeat with his best impression of his father while joking about the presence of all of his wives.

"I'm Alan Thicke and this is exactly the way I want to go out. ... I'd like to thank all of my ex-wives for coming," Robin, 39, joked about his mother and, Alan's first wife Gloria Loring, and his second wife, Gina Tolleson who were on hand to say goodbye.

All of the star tributes to Alan Thicke 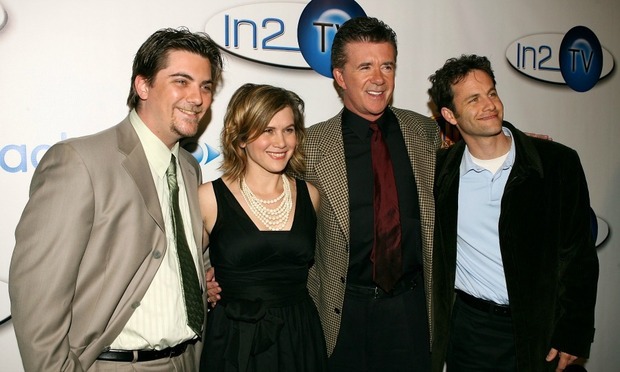 After the service, Alan's daughter-in-law Dolly took to her Facebook page to thank all the attendees and share images from the ceremony. "Tonight's memorial for Alan was just about perfect. So much family and so many historic friends came out to remember our beloved father-figure," the post read in part. Speaking for Alan so beautifully was (I'm realizing now) an all-star cast. We heard from our own Robin Thicke who brought up all dear dad's best friends, Bob Saget, Bill Maher, Alex Trebek who I had no idea had such old deep ties to our family, the entire cast of Growing Pains including Leo and Kirk Cameron who I had the pleasure of meeting for the first time, along with his wife who became an instant friend."

Alan passed away on December 13 at the age of 69 after suffering a heart attack while playing a game of hockey with his 19-year-old son Carter.