Tomorrow marks the highest of holidays in the land of Hollywood man crushes, David Beckham's birthday, and we would like to pause to personally thank his parents on behalf of the Universe. As he spends turning 40 with his family and friends in Morocco, to celebrate the occasion, we dug through our archives and rounded up the former athlete's 21 most memorable moments caught on camera, including some precious moments with his wife Victoria and their four children Harper, Brooklyn, Cruz, and Romeo. 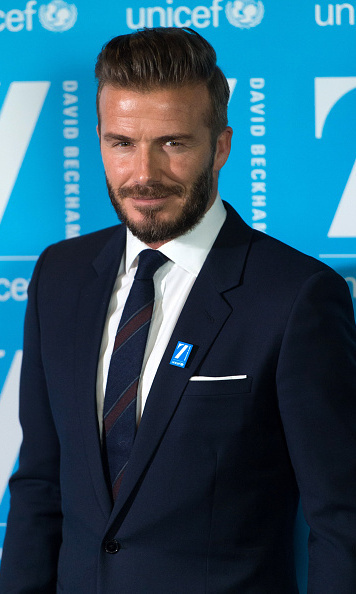 This is hardly the first time the former England soccer player has caused us to take a moment of reflection over his dapper personal style and fortunate genetics. The husband to designer and former pop star, Victoria Beckham, has become a muse to men's style both on and off the field over the past decade. While he’s now retired from the world of soccer, he hasn’t left the spotlight completely. David is regularly snapped being honored for his many commitments to humanitarian work with UNICEF, Unite for Children, Unite Against Aids, the Elton John Aids Foundation, Malaria No More UK, FC Harlem Lions and supporting his wife’s growing fashion empire.

Whether he’s gifting President Obama, distracting Anna Wintour from the catwalk, or simply being a positive role model to kids all over the world, Becks is arguably the world’s most famous athlete. The soccer star was even named “Most Stylish Man of The Year” by GQ in 2013 and continues to win hearts through his generosity, smile, and down-to-earth nature. It probably doesn’t hurt that he always looks great while doing all of these things.

It is no secret that he is photogenic. From vintage Beckham on the field in England, to red carpet arrivals in America, to spending weekends with his picture-perfect family, these are the photos we can’t wait to click through again.