#MomLife! Kim Kardashian followed up her rough night of mommy duties with a little playtime and a tough workout. The 35-year-old reality TV superstar got very little sleep and had the Snapchat story to prove it. In a makeup free snap shared with her fans, the Keeping Up with the Kardashians star talks to her and Kanye West's daughter North, 2, about her sleepless night. 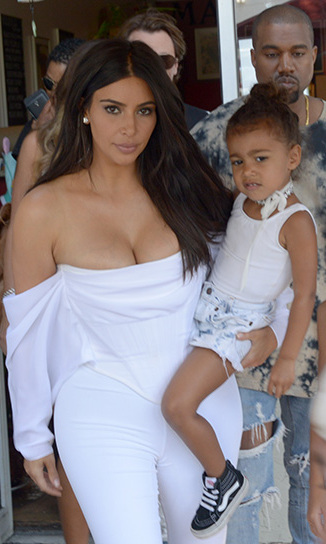 "I'm so tired, your brother was up four times last night," she shared with her little tot. "What's happening? I just need to get up and work out."

CHECK OUT NORTH'S MOST STYLISH LOOKS

Unfazed by her mother's qualm, North turned Kim's pre-workout time into her playtime. In an adorable snap, North lays in the bed and showers her mommy with kisses. "It's kind of hard to work out when you've got babies lying all over you," she playfully told North. "My workout's in 15 minutes. Can I work out?'"

Although Kim and Kanye's five-month-old son Saint was absent from the snaps, North hammed it up for the camera. "'Wait, does anyone know where North is? I can't find her. I just see this big blanket on the floor,'" Kim said as North giggles in the background. Once playtime was over, Kim made it to her workout which included a quick foot race with Kanye.

Kim recently shared that North was a little jealous of her new baby brother's arrival, but has since moved on. "She would cry so much and try to pull him off of me," Kim told her sister Khloe Kardashian on the final episode of Kocktails with Khloe. "She was so jealous that she took her little milk box, put it in my bra... with the straw sticking out because she wanted to drink while he was drinking."

She continued: "She goes, 'Mommy, I'm not mad anymore, you can feed baby brother I won't cry. And I was like 'honey, the milks all dry."