It has been a big week for up-and-coming label Saloni. Days after Kate Middleton wore the Indian designer in London, actress Kerry Washington picked the brand to wear to the Stylemakers awards in Los Angeles. 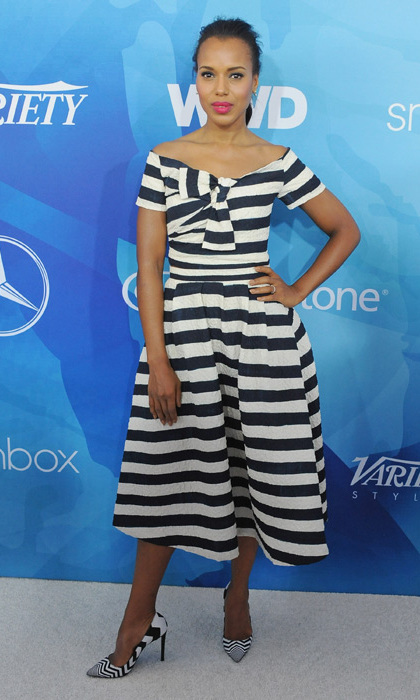 Kerry, 38, isn't the only Hollywood fan of the designer. Actress Carey Mulligan wore the same royal blue dress as Kate as she attended the Small World Event in Gstaad last year.

The striped Saloni creation was Kerry's red carpet choice as she helped honor another trendsetter, her good friend and Scandal costume designer Lyn Paolo at the inaugural Stylemakers bash on Thursday. “There’s literally no way I can get up and play Olivia Pope every day without Lyn Paolo," said the mom-of-one. "She helps me define this character, she helps me be this character, she helps me understand this character. She’s so talented and she’s become such a dear friend, so I’m very happy to be here for her today.”

Later in the evening, the star revealed how she and the costume designer became friends. “We got to the sixth episode of the first season and it had something like 19 changes," Kerry said during her speech. "I was exhausted, I had never worked so hard in my life, including working on Broadway. Television is not easy. Lyn was equally as exhausted and we walked into a room and cried together for about 10 minutes

"At that point I knew that I would be friends with her forever, because she takes clothes seriously. This is a woman who is willing to cry to get it right. We have been crying and laughing ever since."