Instagram started out as a way for ordinary people to share photos and network, but it didn't take long for celebrities to realize the potential of reaching out to their fans directly just by snapping a candid photo. Now, as the wildly-popular social media platform celebrates turning 5 in October, the global audience that the top celebrity Instagram users have is pretty staggering.

Beyoncé, Kendall Jenner and Jessica Alba were among the first stars to start using the app, but it is Taylor Swift that has been crowned Queen of Instagram after collecting more than 48.7 million followers and surpassing Kim Kardashian in August.

To commemorate Instagram’s milestone anniversary, HELLO! had some fun comparing the amount of followers of the top five celebrities with the population of countries around the world.

CLICK ON THE PICTURE BELOW TO SEE ALL THE MAPS 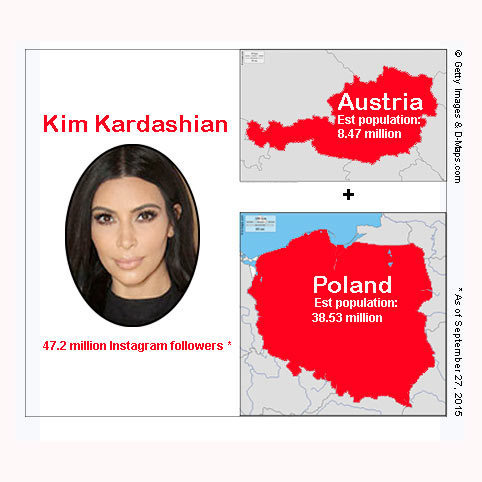