Another day, another hair color for Kylie Jenner! The 18-year-old unveiled a brand new look on the red carpet at a Sugar Factory event in New York on Wednesday.

"I love having fun for the sugar factory," she captioned an Instagram photo of her new pastel green 'do that she dubbed "#cottoncandy mint." 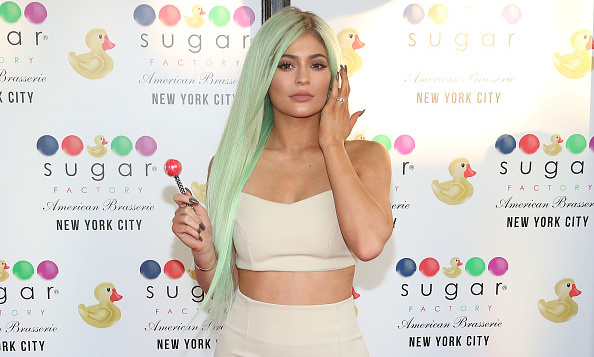 It was a quick change for the reality star, who walked the runway with blond hair in brother-in-law Kanye West's New York Fashion Week show just hours earlier. Kylie traded in her Yeezy Season 2 apparel for a cropped top and skirt by Australian designer Zachary the Label.

The teen, who has her own line of hair extensions and recently admitted to seeing a plastic surgeon to get lip fillers, has dyed her hair all the colors of the rainbow (including grey) over the past couple of years. And for those keeping track, she only went blond (like big sister Khloe Kardashian) two weeks ago. "Took months of not dying my hair and wearing wigs to get my hair back to health so I can do this!!" she wrote on Instagram as she shared a photo her hair transformation. "I'm going dirty blonde for the fall," she added. "I'm coming for u khloe!"

Khloe admitted in an interview with Seventeen in November that she's not as brave as Kylie when it comes to experimenting with color.

"I love that Kylie changes her hair all the time," Khloe said. "With Kylie dying her hair and doing all that stuff, I really live through her — I just don't know that I could pull it off. But I love it."

"Kylie Jenner has this attitude and is confident in her style," he told E! "Youth culture has always influenced fashion. This is what is happening now."