Michelle Obama may be the First Lady, but she might also want to add comedian to her stellar resume. The charismatic 51-year-old was at it again, making audiences laugh as she joked with Jimmy Kimmel – and presented her new campaign to encourage kids to eat more fruits and vegetables.

In the clip, Michelle introduced the new drive, "FNV," but Jimmy made the innocent announcement a bit racier. "As in eat your efin' vegetables?" Jimmy asked Mrs. Obama, adding, "I know what [the F] stands for, I have HBO."

The first lady clarified saying that the "F" means "Fruits" and the V means "Vegetables" and there was nothing provocative about it. 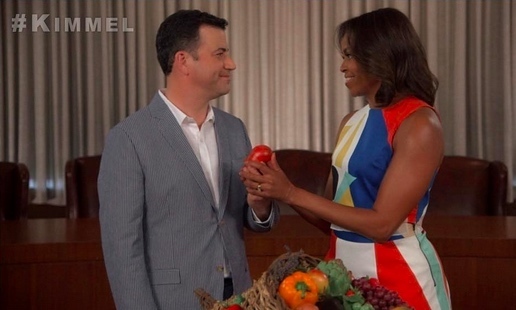 This is the latest appearance Michelle has made for her new campaign after first announcing it in February. A teaser video was released with a slew of celebrities like Jessica Alba, Kristen Bell, San Francisco 49ers quarterback Colin Kaepernick and New York Giants wide receiver Victor Cruz, who help encourage people of all ages to choose fruits and veggies over fast food.

The purpose of the campaign is to give healthy foods like apples and bananas the same amount of TV time as brands like major fast food chains. "If folks are going to pour money into marketing for unhealthy foods, then let's fight back with ads for healthy foods, right?" Mrs. Obama said at a recent summit of the Partnership for a Healthier America, a nonprofit launched to support her Let's Move! Campaign. "Let's do this." 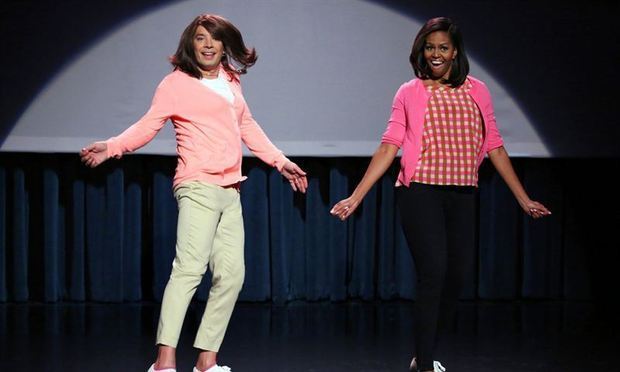 The first lady has joked around with Jimmy Fallon, too Photo: NBC

In the spring, Michelle danced her way across the country in honor of the five-year anniversary of her Let's Move! campaign. She showed off her dance skills on The Ellen DeGeneres Show and took her turn on The Tonight Show Starring Jimmy Fallon.

Proving she can hang with the world's best comedians, the first lady had no problem taking to the dance floor with Jimmy Fallon to perform “The Evolution of Mom Dancing: Part 2" as a sequel to their 2013 “Evolution of Mom Dancing” performance. In matching pink cardigans and cropped pants, the pair danced choreographed routines centered on chores like the “Getting a bag from your collection of plastic bags under the sink” move.

Watch the clips below: