Based on one of Khloé Kardashian's latest Instagrams, North West is one lucky one-year-old! Last week she gave fans a peak inside her niece's toy box on the social media site.

North's auntie Khloé, 30, posted a picture of the youngster's personalized toys, which include a wooden block that has her name spelled out colorfully, as well as custom dolls of her own parents, Kim Kardashian and Kanye West.

Simply captioned "West", the family's last name, Khloé's photo shows Kim and Kanye as fabric dolls, dressed in the their usual stylish way – Kanye in a fur-lined vest and white t-shirt and Kim in a leopard-print dress.

Khloé's Instagram post came on the same day that Kim responded to false reports that she had mistakenly left North behind when departing from her hotel in Paris.

Kim, 33, set the record straight after photos emerged showing her exiting the hotel alone, before going back and leaving again with North. 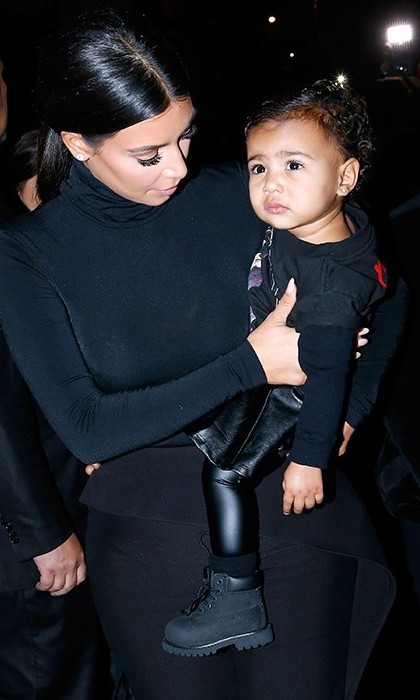 North pictured with Kim at Paris Fashion Week
"Heard on the radio today some story I forgot my daughter at our hotel as I'm leaving for the airport, are you kidding me?!?!?! LOL," she tweeted.

"I went to the car to make sure the car seat was in because the day before we had a car seat issue," she continued. "Do you guys really think a one-year-old would be inside the lobby by herself! Oh wait she was waiting to check out lol."