Prince Harry and Meghan Markle may have given us a clue about their son’s name – shortly after announcing they were expecting him. In October, the Duke and Duchess of Sussex traveled to New Zealand as part of their 16-day royal tour. During their stop in the country, the pair met a young boy from Auckland name Archie – and reacted to hearing his name. According to the student, after he introduced himself to the Prince, Harry kindly replied, “Archie, I like that name.”

The royal soon ushered his wife over and shared the name with her. “He said, “I like that name or something like that [to Meghan],” the boy shared. "He said: “‘Come on, Meghan, look at these guys.’ Because we had roses in the garden. And he introduced our names and things to Meghan, and kind of nodded when they said our names.” Harry, 34, and Meghan, 37, welcomed their first child on May 6. Two days later, the little royal made his debut to the world. Moments later, in a sweet photo featuring the Queen, the royal couple revealed their son’s name.

MORE: The reason Archie Harrison doesn't have a royal title

“The Duke and Duchess of Sussex are pleased to announce they have named their first born child: Archie Harrison Mountbatten-Windsor.” A royal source later revealed to our sister publication HELLO! that the Sussex’s picked the names because “they just liked them.” As for his surname, Mountbatten-Windsor, the name is given to descendants of the Queen and Prince Philip, to distinguish them from the rest of the royal family. 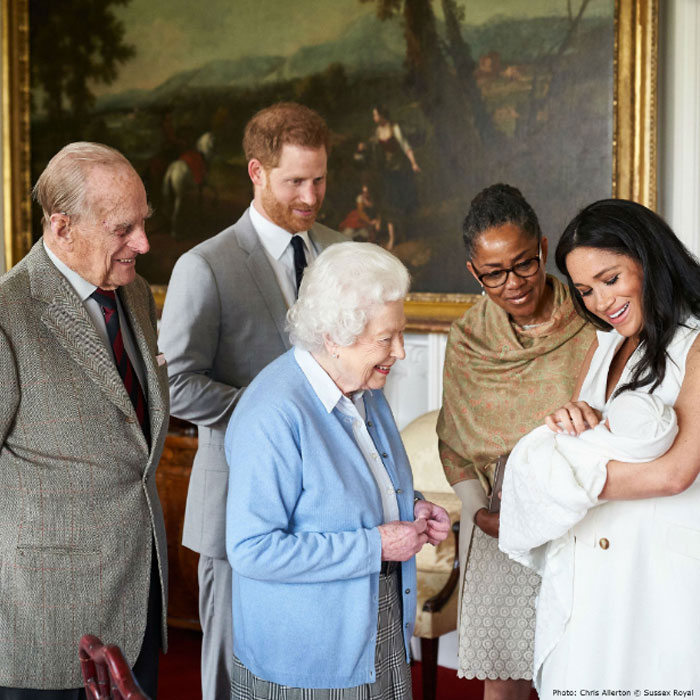 MORE: Does Archie look like Prince Harry or Meghan Markle

Archie, which is sometimes used to shorten Archibald or Arthur, means true and bold. Harrison means “son of Harry.” The young royal watcher wasn’t the only person to possibly inspire the new royal’s name. It was revealed that Archie’s cousin Prince George told one woman that was his name during an encounter in London.