Veganism is a diet that has received a lot of coverage in recent years, but isn’t a new concept. There’s evidence of people choosing to avoid animal products that dates back 2,000 years. The concept of refusing to eat eggs and dairy on ethical grounds started to take shape in 1806 CE, with Dr. William Lambe and Percy Bysshe Shelley. They were some of the first people to publicly object these animal products. In 1944, the term “vegan” was coined by Donald Watson who founded The Vegan Society.

Fast forward to modern day and this plant-based diet trend has increased dramatically. In the U.S. there has been a 600% increase in people identifying as vegans in the last three years. In addition, there have been three times as many searches for vegan than there are for vegetarian or gluten free in the past three years.

***Scroll down for full infographic

What is a vegan diet?

A vegan diet is one that embraces plant-based ingredients while avoiding all animal-based  products. This includes not consuming any type of meat, fish and shellfish, dairy, eggs, honey or gelatine.

What are the reasons to go vegan?

There are many reasons that individuals choose to go vegan. Three of the most common reasons for a transition to a plant-based diet are ethical motives, health benefits and environmental concerns.

These individuals believe that all creatures have the right to life and freedom. They object modern farming practices that don’t grant them these rights. These animal-lovers are saving nearly 200 animals a year by going vegan.

In addition to saving animals, going vegan has a multitude of health benefits. It’s reported that adult vegans are an average of 10 to 20 pounds lighter than adult meat-eaters. Not only does this diet cause weight loss, but vegans are less likely to develop heart disease, cancer, diabetes and high-blood pressure than meat-eaters.

Individuals may choose to go vegan to reduce the environmental impact our food systems have on the earth. Animal agriculture produces 65% of the total amount of nitrous oxide emissions, comprises 35-40% of global methane emissions and  creates 9% of global carbon dioxide emissions. It can also lead to deforestation and takes a toll on our natural resources.

10 tips for adopting a vegan lifestyle

No matter your reason for going vegan, the change to a plant-based diet can be a difficult. To help you make the transition, we have 10 tips for adopting a vegan lifestyle. Read through to find advice you can apply to your lifestyle and get insider tips from publicly vegan celebrities. 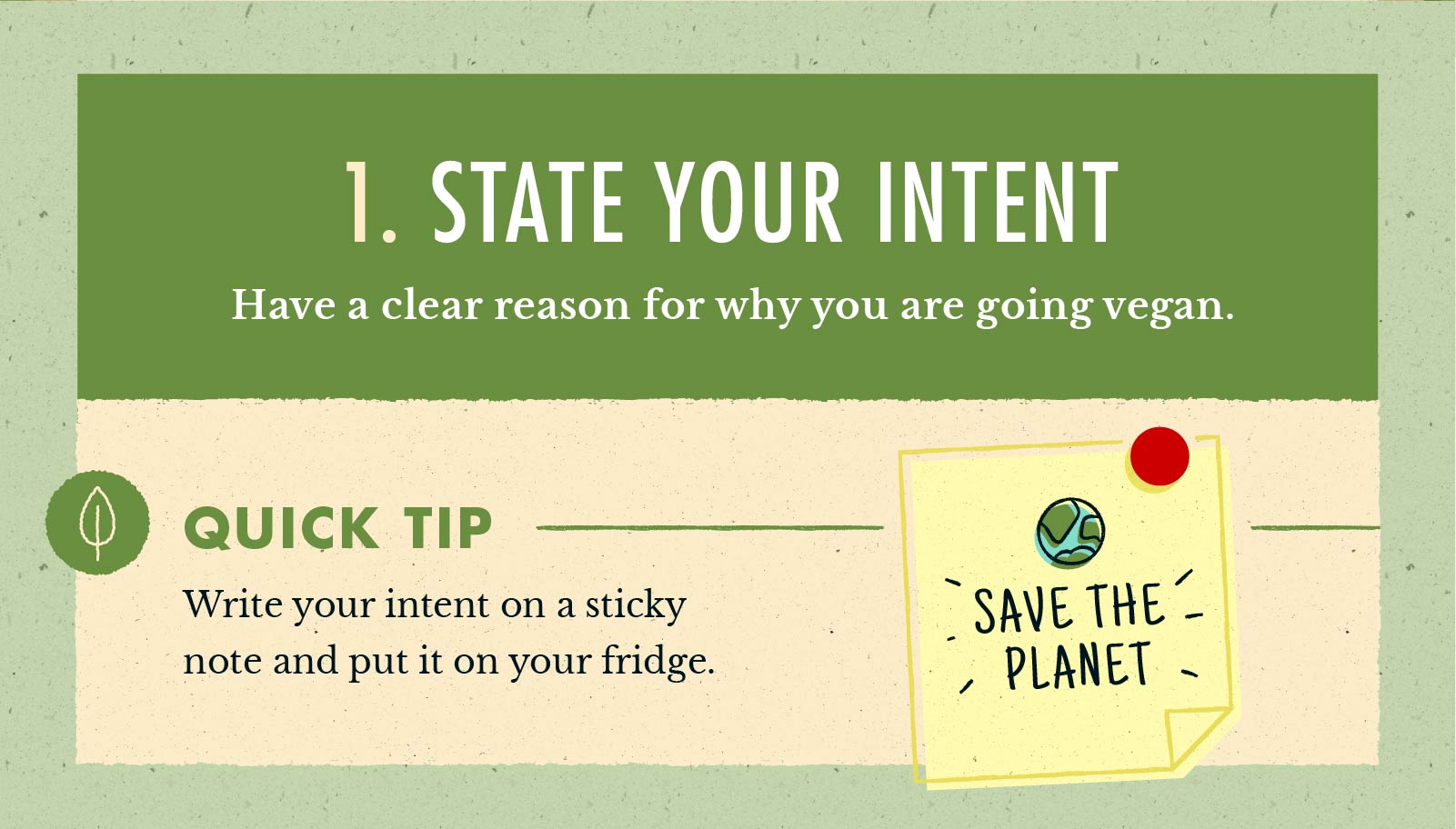 Like every goal or resolution, having a good reason and solid plan will help you succeed. The same goes for changing your diet. Having a strong motivation for going vegan will help you stick with the diet, even when you are faced with difficult situations.

As you saw above, there are a few main reasons people choose to go vegan, but each person has different motives. There might be a more personal reason you are making the switch. Kat Von D explains her motivation behind being vegan by saying “It taught me to look past myself – to consider how my choices affect others – the animals, the people around me, and the planet we live on. To me, veganism is consciousness.”

You probably already have your reasoning in mind, but stating it ahead of time will help you create a clear path to follow. Try writing down your intention on a sticky note and placing it on the fridge. This will be a helpful reminder of why you are making the switch. 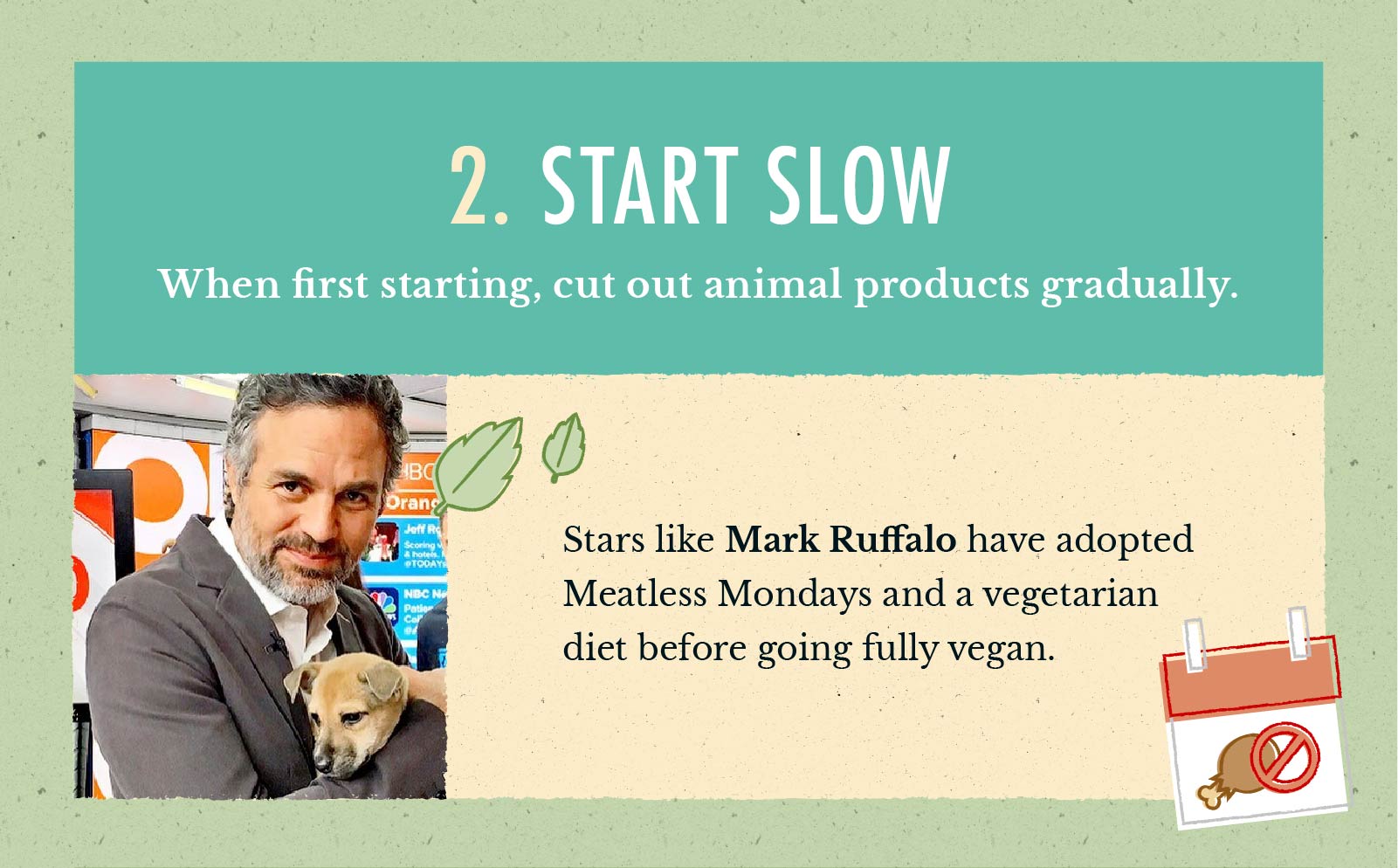 When making a change, especially to your diet, it’s important you start slowly. It takes time for your body to adjust to new eating habits. Brittany and William from I Love Vegan suggests adding to your diet before subtracting from it. By adding whole grains, beans, legumes, nuts, seeds and vegetables into your diet, your body will grow accustomed to them and the removal of animal products won’t be as noticeable.

Another strategy for transitioning to a new plant-based diet is to make slow but consistent changes. Mark Ruffalo is a longtime vegetarian, who started his diet by participating in the popular fad of Meatless Mondays. Start by removing meat from your diet once a week, or give vegetarianism a try before moving fully on to veganism. 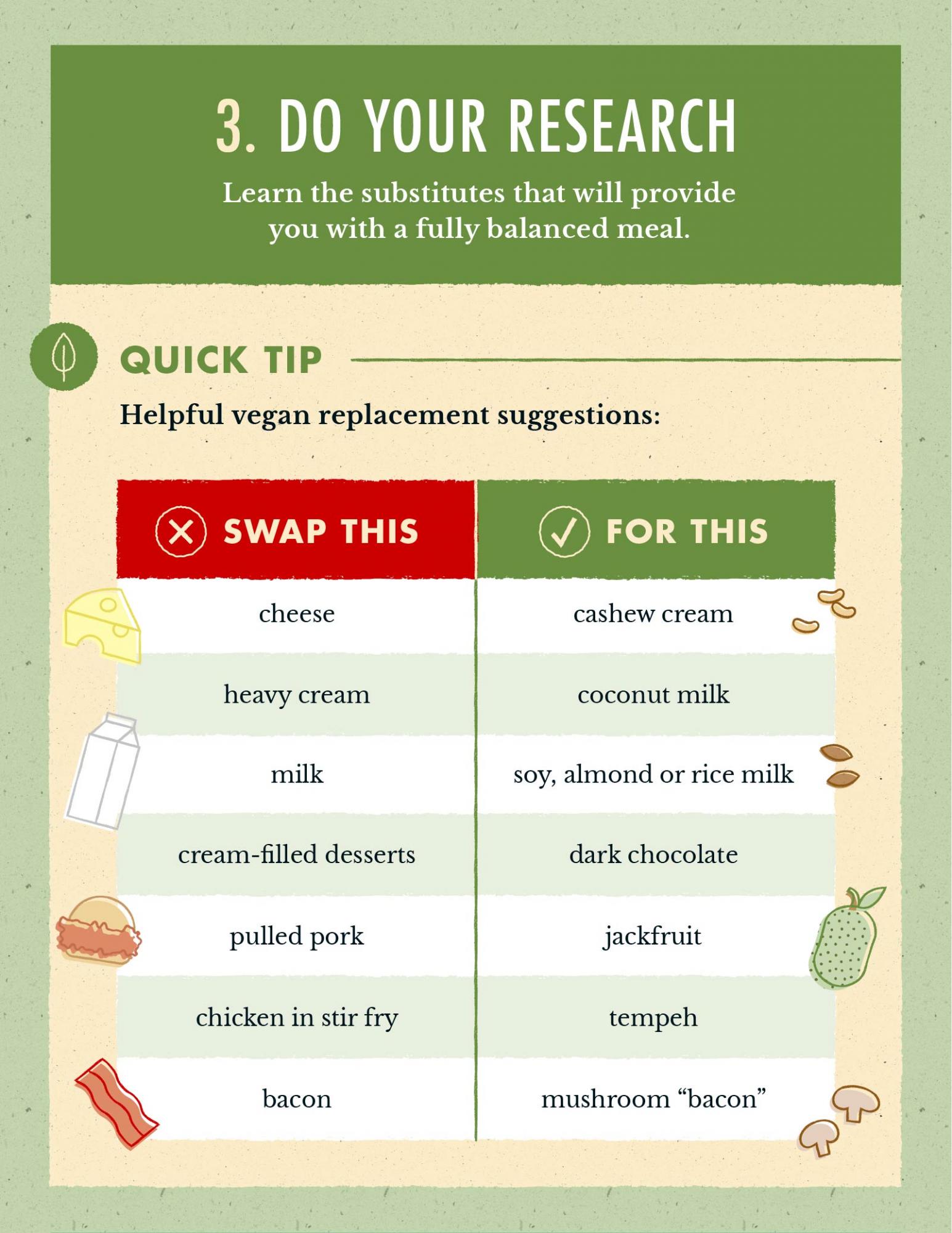 The vegan diet is considered an extreme one because it cuts out so many foods. If your diet mostly consists of meats and cheeses, cutting them out all at once without replacing them with nutritious alternatives can take a toll on your health. Luckily, there are many substitutes that will still provide you with a fully balanced meal.

With a little research, you’ll be able to find replacements for your favorite meals. Peter Dinklage, also known as Tyrion Lannister in the Game of Thrones series, has been a vegan since 2014. In all the scenes that require him to be eating meat, he’s actually enjoying tofu or fake meat instead. This goes to show, there are plenty of substitutes you can find that look and taste like the foods you are now avoiding.

Try it with a buddy 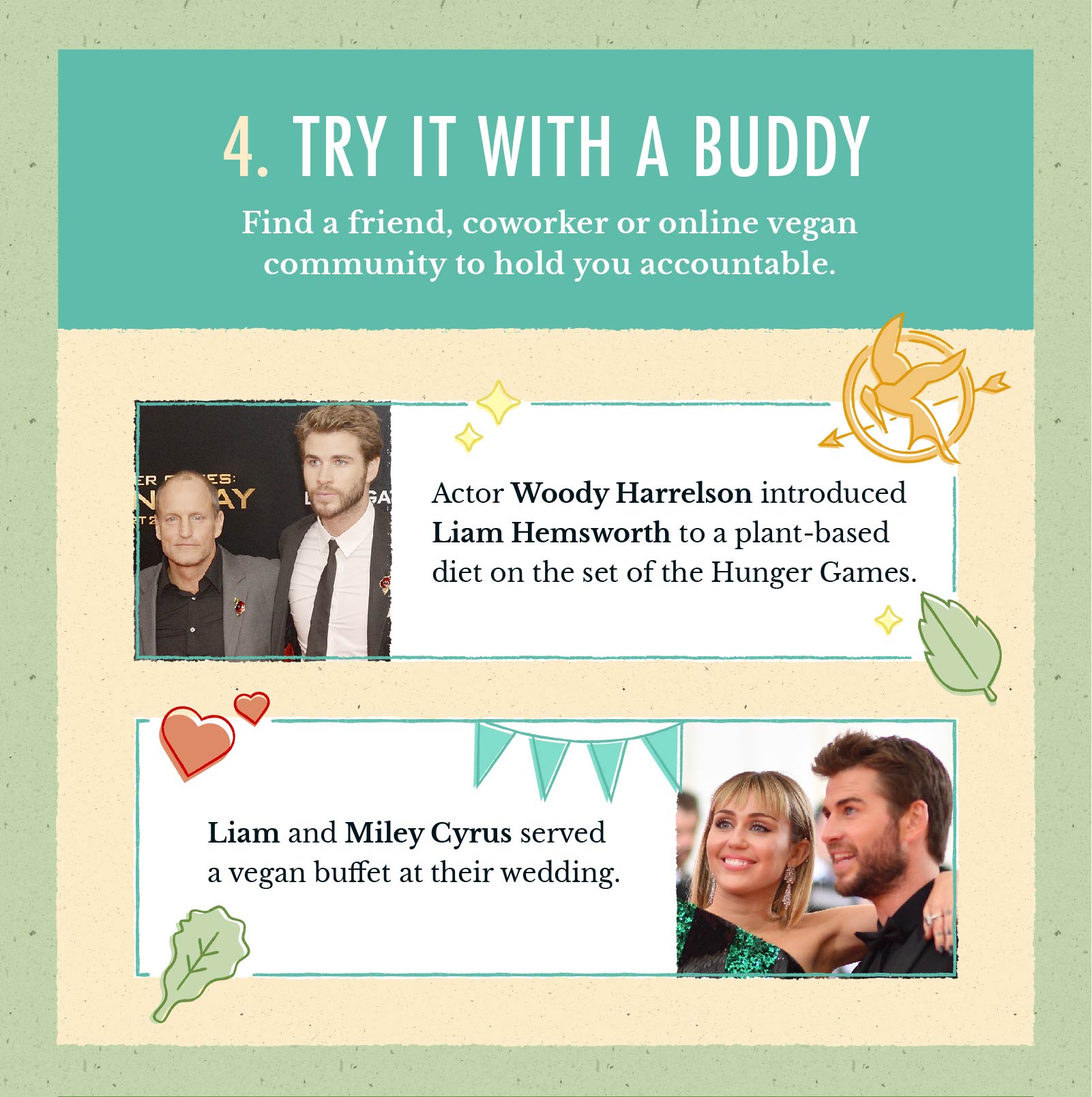 Going vegan on your own can be intimidating, especially if your friends or family are meat eaters. To help make the journey easier, try going vegan with a buddy. This will hold you accountable and keep you inspired in your food decisions.

Liam Hemsworth’s vegan diet began when his coworker and long-time vegan, Woody Harrelson, encouraged him to try eating a plant-based diet when he got the flu on the set of Hunger Games. Liam explains, “Woody Harrelson told me that I should try eating raw vegetables. He’s got more energy than anyone I’ve ever met, along with the nicest guy in the world, so I tried it out. Since then I’ve felt amazing and have been eating that way ever since.” Harrelson introduced Hemsworth to this diet and was around to encourage him and keep him accountable.

Liam Hemsworth also has his wife, Miley Cyrus to hold him accountable. Cyrus is a committed vegan and has the vegan trademark tattooed on her arm to prove it. Miley and Liam are very public about their vegan lifestyle, displaying a vegan buffet at their wedding and arriving at the Met Gala in vegan faux leather shoes.

Surrounding yourself with like-minded vegans who can encourage you and will help your stick with the diet. If you can’t find people in your day-to-day life that want to become vegan, try looking online for vegan communities or 30-day vegan challenges. There is a whole community that has nothing but support for those who are choosing a vegan lifestyle.

Be aware of other outside factors 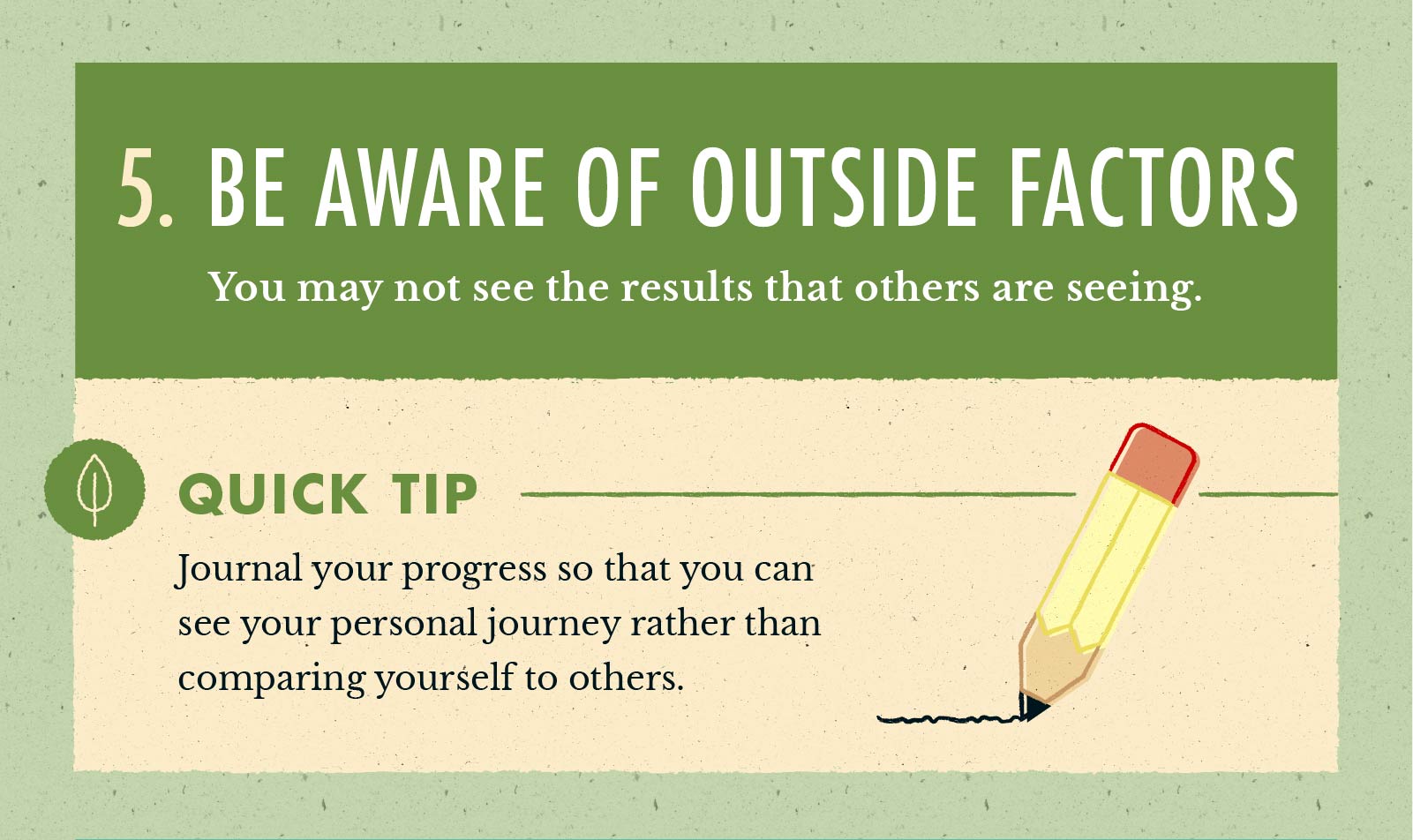 Like most diets, the results you see on others may not be the same results that you see on yourself. If you are becoming vegan with the hopes of health benefits, there are any number of factors that will influence your energy levels and weight loss.

For example, professional tennis player Serena Williams was a vegan and cut out sugar as well, but didn’t see any results until she stopped breastfeeding. She remarked, “I lost 10 pounds in a week when I stopped. I just kept dropping.” Each body is different and often times these outside factors can impact the progress you see.

Cook your meals at home 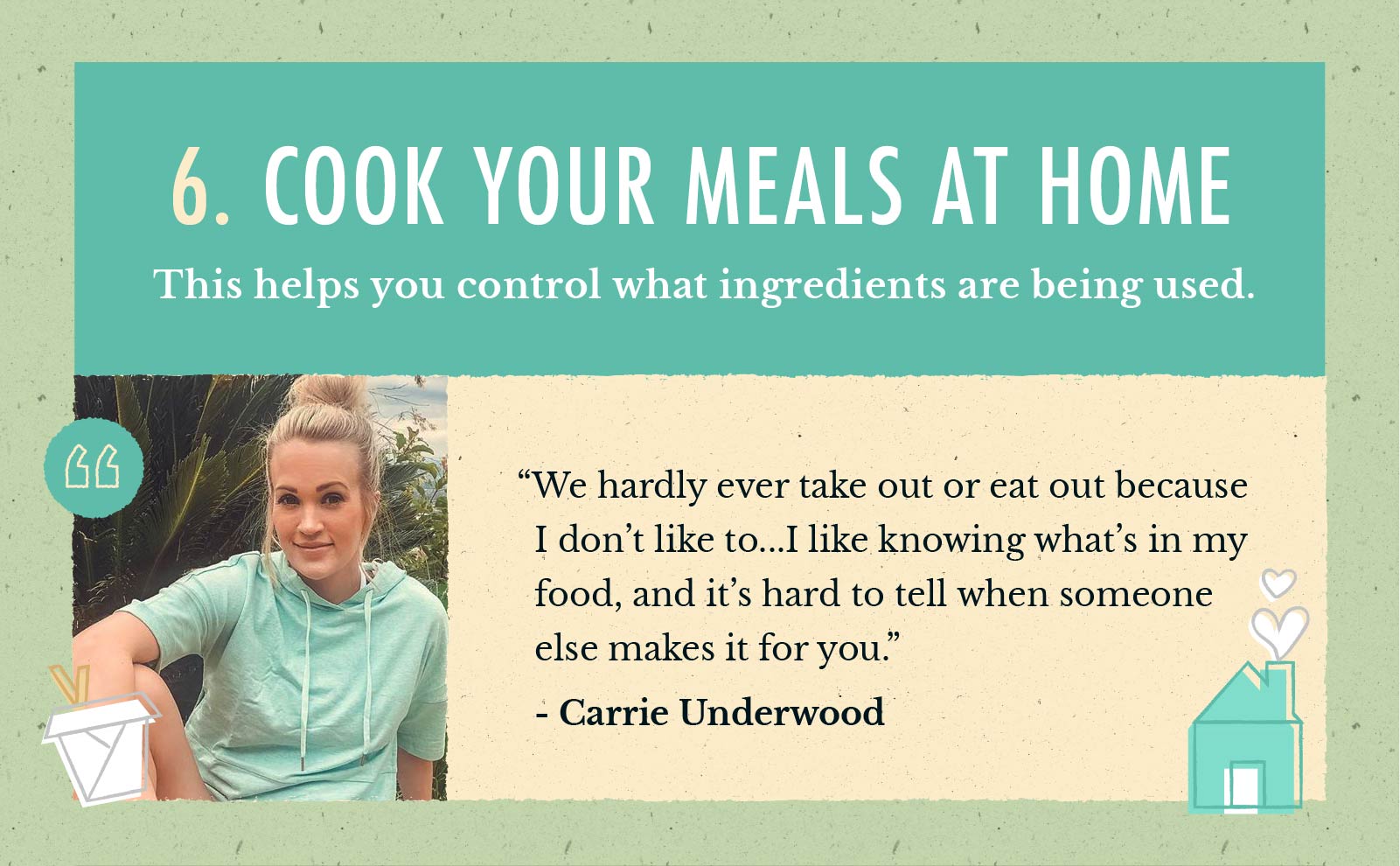 Cooking your meals at home is the easiest way to ensure you are sticking to the vegan diet. When you are eating out, you can’t always be sure that the meal is completely vegan. Most cuisines include cheese or eggs, and there isn’t always a replacement available. Cooking your own meals at home puts you in control.

Musician Carrie Underwood agrees that cooking at home can give security in knowing what you are eating. She says, “We hardly ever take out or eat out because I don’t like to...I like knowing what’s in my food, and it’s hard to tell when someone else makes it for you.”

The other benefit to cooking at home is that you can get creative with your meals. Rather than just sticking to a salad, there are plenty of plates you can recreate with ingredients you know are vegan.

Have a game plan when you go out 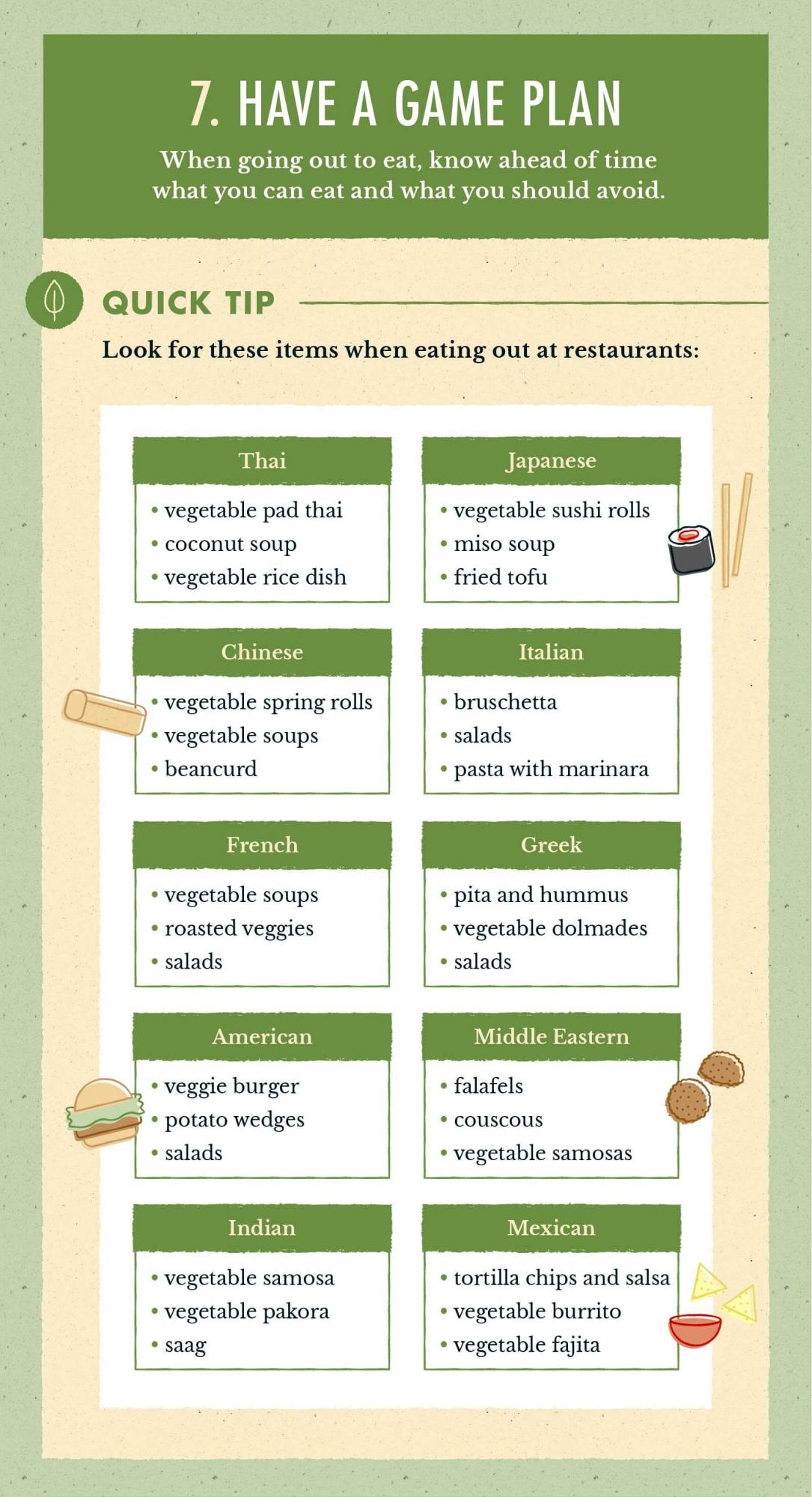 Although, cooking at home is the safest option, it’s not always realistic. There are times when you’ll be traveling and need a quick bite or want to meet up with friends at a restaurant. When this happens, having a game plan will help you keep to the vegan diet.

Knowing what to look for on a menu will help you find a meal you can eat without worrying about breaking the diet. Start by looking at vegetable dishes and then work your way to the others to see if there are ways you can make it vegan. It can also be helpful to find the menu ahead of time online or call ahead to see what options they have.

If you don’t want to go through the trouble of searching the menu for an entree that’s vegan, you can always opt to have a smaller meal out and then make up for it later at home. This is Ariana Grande’s tactic. She notes, "It is tricky dining out, but I just stick to what I know – veggies, fruit and salad – then when I get home, I’ll have something else." 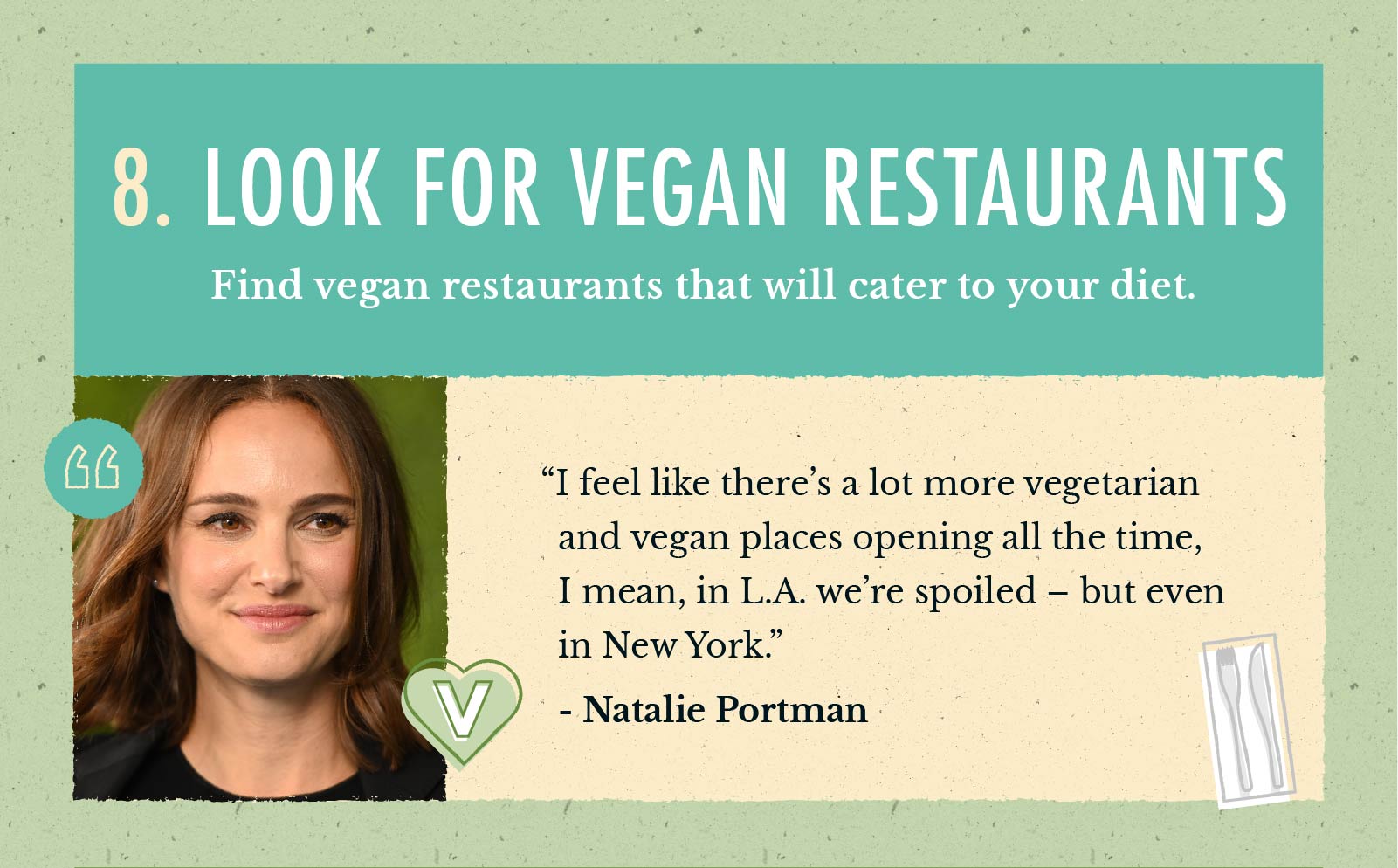 To avoid an in-depth reading of the menu at every food establishment you enter, finding restaurants that cater to vegans can be very helpful. Luckily many restaurants have picked up on this trend and provide vegan options.

Actress Natalie Portman has been a long-time vegan advocate and has expressed, “I feel like there’s a lot more vegetarian and vegan places opening all the time, I mean, in L.A. we’re spoiled – but even in New York.” Although large cities have been more keen to adopt vegan options, the trend has been spreading all across the world. Even fast food chains like McDonalds have joined in on the meatless burger trend.

Be realistic about the amount of work it will take 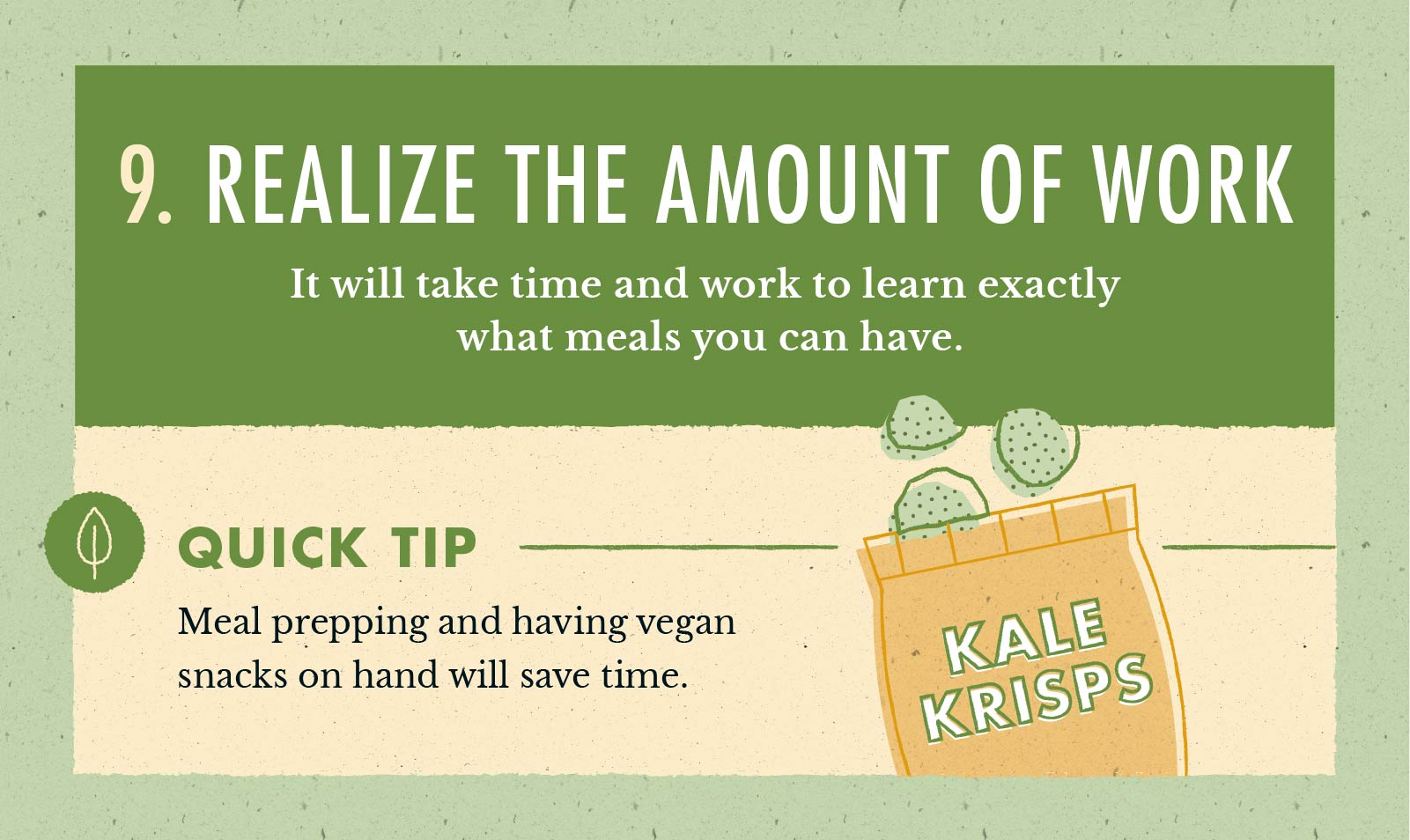 A vegan lifestyle will take work. It will take time to learn what meals you can and can’t have. Once you get the rhythm of what to eat, it will take restraint and dedication to keep to the diet. Singer Jhene Aiko speaks to this, saying “My goal is to totally be completely vegan and only use vegan products, but I’m human and I have to work on it daily.”

Don’t let others discourage you 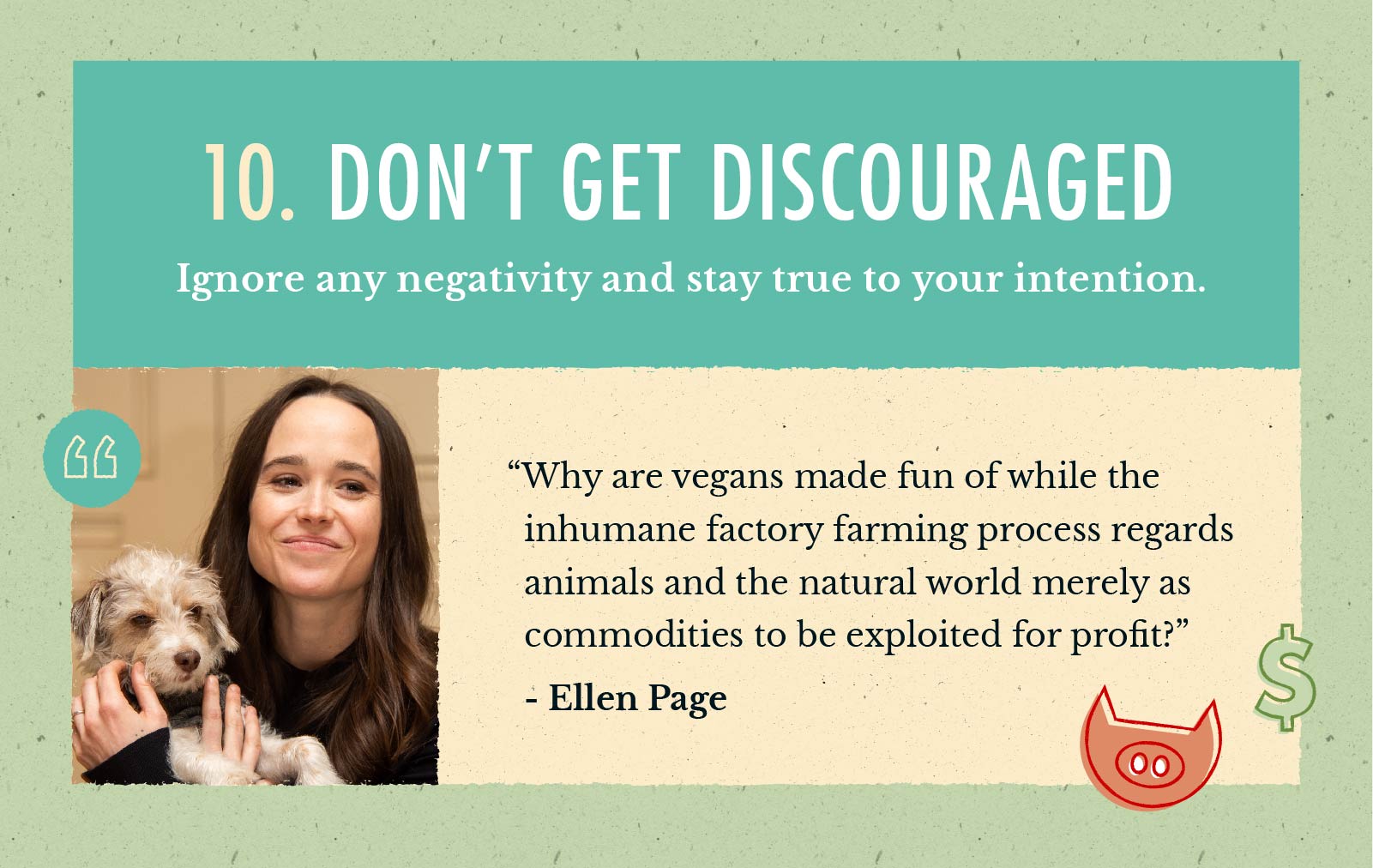 A vegan lifestyle can sometimes have negative connotations. People may try to coax you into eating their non-vegan meal or make fun of your choices. Actress Ellen Page questions this common occurrence, asking, "Why are vegans made fun of while the inhumane factory farming process regards animals and the natural world merely as commodities to be exploited for profit?" If others are discouraging your choice, remember your intent for becoming vegan. This will help you disregard any negative comments that others may have.

Going vegan is a choice that can have a positive impact on your health and the environment. Following these tips will help you easily transition into making healthy decisions that you can be proud of.

“Here are the vegan celebrities who are making us want to eat veg.” Glamour UK, 2019 April 23, https://www.glamourmagazine.co.uk/gallery/celebrities-who-are-vegan

Petre, Alina. “What Is a Vegan and What Do Vegans Eat?” Healthline, 2016 July 29, https://www.healthline.com/nutrition/what-is-a-vegan

Turnbull, Sam. “How to Eat Vegan at Any Restaurant (And Not Order Salad)” It Doesn’t Taste Like Chicken, 2015 June 22, https://itdoesnttastelikechicken.com/eat-vegan-restaurant-order-salad/

“Why Going Vegan Should Be Your New Year’s Resolution.” PETA, https://www.peta.org/living/food/top-10-reasons-go-vegan-new-year/

“Why the Global Rise in Vegan and Plant-Based Eating Isn’t a Fad.” Food Revolution, 18 Jan 2018, https://foodrevolution.org/blog/vegan-statistics-global/