Nicky Hilton can't get enough of #MomLife. The 32-year-old heiress has found nothing but joy, even in the sleepless nights, since the arrival of her and James Rothschild's, daughter Lily Grace. "I love it! I love it!" she shared during an interview with E! News backstage during the Carolina Herrera show on Sept 12. "I have an alarm clock for the next 18 years, about 5:30 a.m. every single day. But I love it! Waking up to that face—it's heaven."

Nicky and her husband welcomed their first child, whose full name is Lily Grace Victoria Rothschild, on July 8, 2016 in New York City. 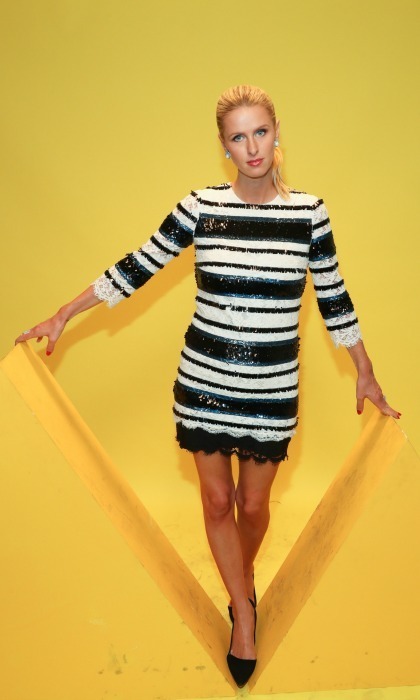 Nicky says she loves being a mom Photo: Getty Images

The heiress managed to keep working, traveling and carrying out other obligations during her pregnancy, but now that her daughter has arrived, Nicky admitted that she would rather enjoy the moments with her at home.

See what mommy accessory Nicky turned into a fashion statement

"I always time everything to leave during a nap time so I'm not missing anything," she said. Only weeks after giving birth, Nicky has been making her rounds at NYFW, showing off her post-baby figure front row at Jeremy Scott as well as stopping by the HUGO BOSS and W Magazine party celebrating 'The Shot.'

The new mommy said that due to her good habits, it wasn't hard for her to snap back into shape 10 weeks after giving birth. "I really didn't gain too much weight during my pregnancy," Nicky shared. "I really looked after myself and had a healthy diet and [kept] working out."

ALL THE BEST MOMENTS FROM NYFW

Nicky and James have yet to officially show off their little girl. Last month, after her birth, Nicky took to her Instagram to post the first image of her daughter in a stroller. "Morning stroll," she captioned the picture, that shows her in a printed yellow dress, pushing her daughter around the city in style.