Gigi Hadid had the perfect setting, playlist and crew during her Sports Illustrated Swimsuit shoot. The sports magazine released a video of the 20-year-old model giving fans a behind-the-scenes look at her sexy shoot in Tahiti and the one factor that helps her nail her shots.

CLICK BELOW TO WATCH GIGI TAKEOVER TAHITI FOR SI

"When I'm modeling music is a really big part to me," she shared as she sang and danced along to "Blank Space" by bestie Taylor Swift. "It changes the whole energy on the set."

Not only does the Maybelline model give the inside scoop on her music, she lets fans in on the shot that stood out to her the most. "I loved every shot, but I think the one that stood out to me the most was the white one piece that connected on the sides," she said. "I just thought that it was so, not only sporty but vintage which I love, but it kind of reminded me of the old Sports Illustrated swimsuits that I love."

Gigi and Lily at the SI VIP BBQ in Miami Photo: Getty Images

When it comes to a favorite swimsuit from the shoot, Gigi and her new beau Zayn Malik agree. During an interview with People magazine, Gigi shared that Zayn likes the "white one."

After working the red carpet on Tuesday at the Sports Illustrated VIP party in NYC, Gigi and the other models traded in the winter weather up north for some Miami heat. Gigi and BFF, and fellow SI model, Lily Aldridge enjoyed a BBQ and spent time with fans at the 1 Hotel South Beach. Gigi also found some time to have some fun with Chrissy Teigen during the Miami fan event, playfully rubbing her baby bump while signing autographs. 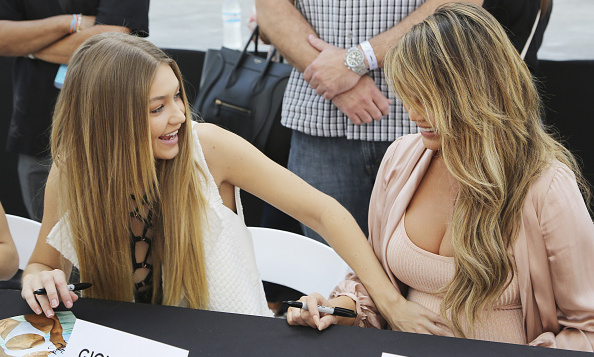 Between taking over the catwalk at New York City fashion week and her SI launch, Gigi has proved there is nothing she can't do in the world of fashion. Check out Gigi inside of the new Sports Illustrated Swimsuit edition that also stars Ashley Graham, Hailey Clauson and Rhonda Rousey on newsstands now.