The Kardashian-Jenners rule Manhattan! Kim Kardashian and her sisters, Kourtney, Khloe and Kendall and Kylie Jenner, made a striking style statement as they launched their new apps in New York on Monday.

While each of the siblings has their own personal style, it is the expectant mom who is getting the most attention as she dresses her baby bump in a series of monochromatic, body-hugging looks. From draping her growing belly in sheer lace, to offering more than a glimpse of skin in a black sheath dress that laced down to her navel, Kim, 34, is showing that this time around she has a handle on her pregnancy style, which was much talked-about and picked apart during her pregnancy with daughter North.

CLICK PHOTO FOR MORE OF KIM'S MATERNITY STYLE IN NYC 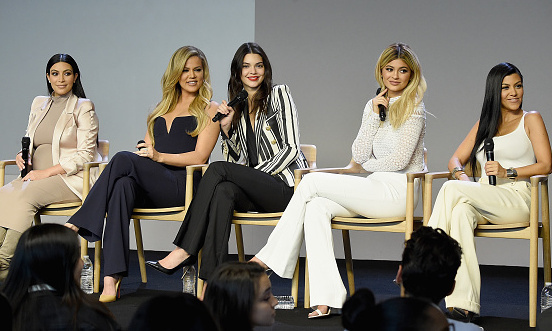 The first time around, she borrowed maternity looks from her sister Kourtney's closet, which turned out to be a big fashion don't. "I also look back at my last pregnancy looks and sometimes I am mortified," Kim, who is six months pregnant, wrote on her new website and app, which launched Monday.

"Everyone used to say Kourtney had the best pregnancy style, so I would borrow a dress she wore when she was pregnant, and OMG it did not look the same!” she said as she explained her inspiration last time around. "The side-by-side comparisons were just not good for my soul, so I finally had to figure out my own style that worked for ME! 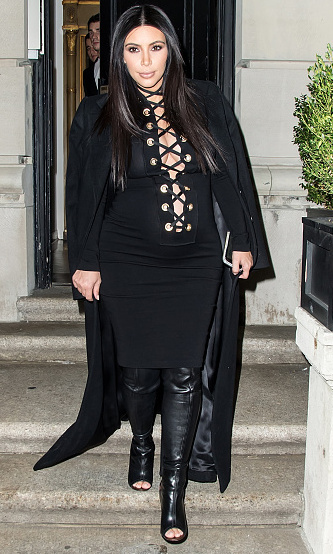 Kim, who is due to welcome a son with husband Kanye West in December, says that last time she worked with five different stylists, which resulted in an aesthetic that kept changing. "This time around, I know what I like — plus, I am confident and not trying to hide my bump," she wrote. "I actually want to accentuate it."

For Kim, that means neutral colors and lots of black, and topping those looks with long-line coats, even when the summer sun is beating down. "I don't care what the weather is, I will always wear my coats," she shared. "I am always freezing, so it works out perfectly for me!" 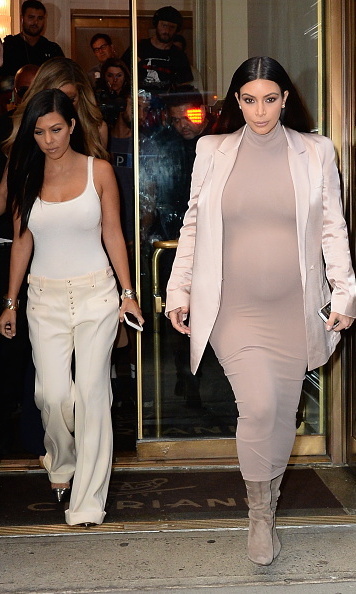 "And yes, long coats to cover my fat arms and ass!" she admitted. "It's such a trip how your body grows and changes, and at the end of the day, you have to wear what you are comfortable in and what you feel good in."

It's clear Kim, who suffered from pre-eclampsia last pregnancy, is feeling good — the reality star has been hitting the town with her husband, and on Monday night the couple attended what she dubbed "The Real Family Dinner" with French fashion editor Carine Roitfeld, Givenchy designer Riccardo Tisci, Courtney Love as well as Gigi and Bella Hadid.

It's clear that style runs in the family, even Kim's daughter, North, who is in Manhattan with her parents, has been showing off some killer kid fashion that would make a grown-up envious of her luxury closet. In a post on her website titled 'Get North's Look: NYC Edge' Kim revealed that her little girl "loves trying on Mommy's Jacob & Co jewelry, so I let her." 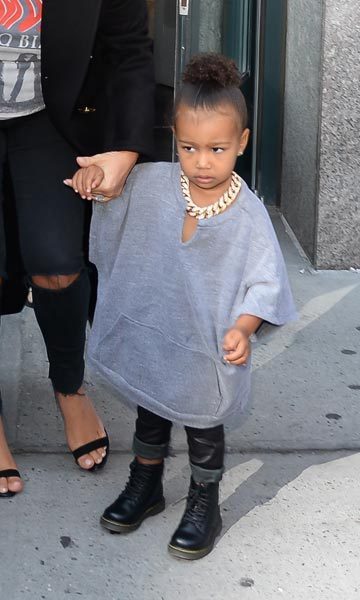 Kanye's mini-me also wears leggings by Alice + Olivia and Dr. Martens boots, and the 3-year-old's hairstyles are also inspired by her mom. The toddler was spotted with an adorable top knot recently because, Kim says, "My hair was also slicked up that day, so she wanted a top bun, too."