It seems like it's no longer just the "Kate Middleton effect" as Prince George has created his own fashion phenomenon. The "Prince George effect" is in full swing yet again as it took just 24 hours for the outfit he wore to Princess Charlotte's christening to sell out. This isn’t the first time the little royal, who turns two on July 22, has helped a designer’s sales on a style he wore.

The toddler was the epitome of cute as he turned up to the event on Sunday in a $189 ensemble of red shorts and embroidered shirt by British designer Rachel Riley for the occasion. And on Monday morning, there were no 2T sizes left of the outfits on the company’s online store.

The tot looked adorable as he turned up at the christening Photo: Getty Images

Royal fans were quick to note the similarities between the outfit that Prince William wore when he first met baby Prince Harry in 1984 and Prince George's ensemble, prompting speculation that the little royal was wearing his father’s original look. However, there are slight differences including white buttons on the shorts and a different embroidery pattern.

Little George was the spitting image of his father in the sweet getup, as he walked hand-in-hand with William, looking slightly bemused at the crowds of cheering fans. The young prince seemed quite transfixed with the excitement as he walked alongside his mother Kate Middleton, who was pushing Princess Charlotte in Queen Elizabeth's vintage pram. 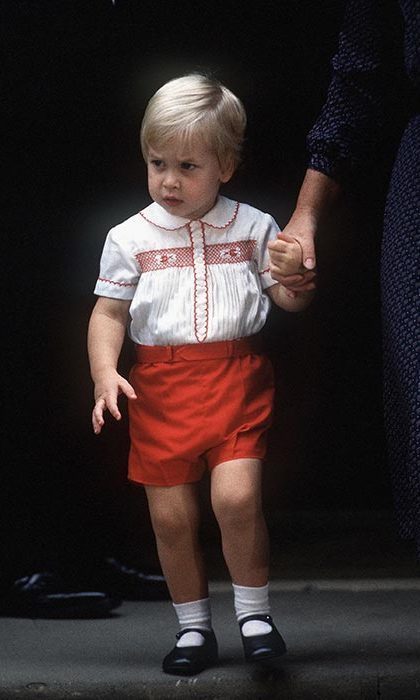 The outfit was almost identical to the one Prince William wore to meet baby Prince Harry in 1984 Photo: Getty Images

This marks the second time that Prince George’s outfit has resembled something his father has worn – just a few weeks ago when he was at Trooping the Colour he wore the exact outfit Prince William himself sported for the event when he was a young boy.

George always causes a spike in sales when spotted in his adorable outfits, with the industry dubbing his sartorial influence "the Prince George effect."

Most recently Charlotte’s older brother caused Crocs’ Croc band shoes in navy to sell out after he wore them for a day out at the polo with the Duchess. 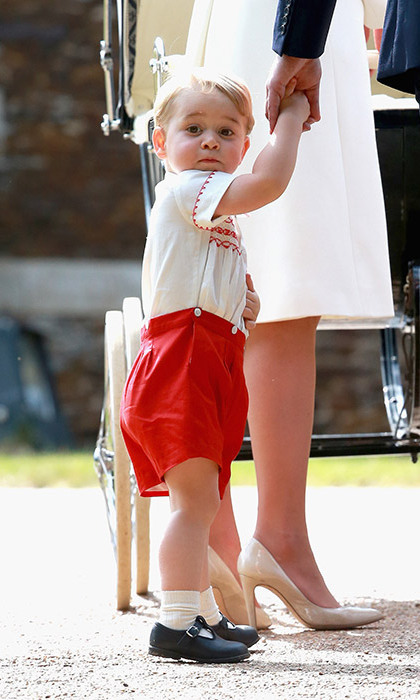 The toddler looked adorable at the christening Photo: Getty Images

“Since the HRH Prince George was spotted wearing Crocs’ Crocband shoe in navy, our size 2 sold out immediately!” Crocs’ UK & Ireland Country Manager Scott Lucas told HELLO! Online. "The shoes have since become a best-seller, thanks to what we’re calling the ‘Prince George effect.'”

“The pictures of Prince George in his Crocs were everywhere, from the UK to America, and Australia to France” added Scott. “It was fantastic to see and obviously everyone at Crocs is happy to see Prince George wearing the shoes!”