Celebrity doppelgängers you have to see to believe 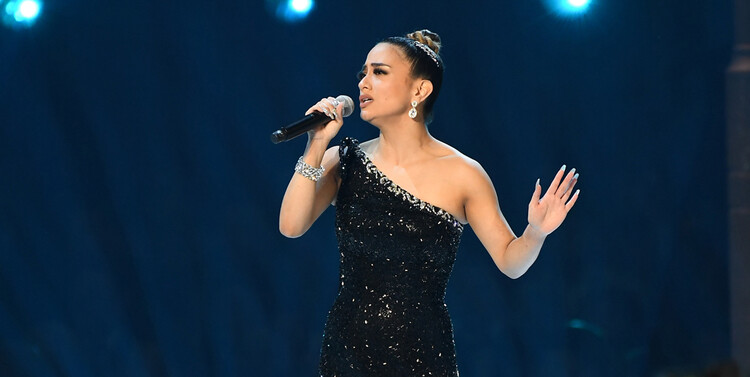 Is it just us, or is it practically impossible to tell Selena Gomez, right, and Mexico-based Instagram beauty Sofia Solares, left, apart? And Sofia's not just a Selena look-alike – she's a fan!

"I love Selena Gomez and I declare myself a fan of her," Sofia told E! News. "And of course it would be a dream to know that she knows of my existence and will devote a few seconds to write me something! I would cry with happiness."

Don't look now, but Gigi Hadid has a gorgeous look-alike! Meet Dutch model and blogger Iza IJzerman. Her similar looks to the supermodel haven't gone unnoticed in the fashion world.

As she told Refinery 29, "When I signed with MiLK [modeling agency], they posted a picture with the caption, 'The new curvy Gigi Hadid' – so that's the moment I realized it might be true!"

Melissa Baizen is a mom-of-two who lives in Wisconsin. The optical manager may be thousands of miles from Los Angeles but that hasn't stopped people from thinking she is the By the Sea actress.

With her full lips, long brunette hair, high cheekbones and clear green eyes, it's easy to see the striking similarities between the pair. "I do get recognized. I get stared at quite a lot," said Melissa, 34. "I find it funny. It's quite surreal. She has always been an idol of mine. It's crazy to be compared to her. I've always been hard on myself. Some days I see it but others I don't think I look like her."

She added: "I wish I had her smile, I hate my teeth. I have looked up to her quite a lot. I like her movies but I admire her the most for her humanitarian work. My personality is completely different but a lot of people say I really look like her."

Jenny... or Jess from the block?

Model and California native Jessica Burciaga not only takes plenty of hair cues from the 48-year-old Jennifer Lopez – she also has her fashion sense. Jessica is blessed with perfect curves and that J Lo glow – and her more than one million followers on Instagram love to point out how much she looks like the star.

Jacky Vasquez is a dead ringer for the Into You singer. Ariana Grande's look-alike has over 200 thousand followers on Instagram. During an interview with the site sweetyhigh.com, Jacky admitted, "I've always been an Ariana fan! Ever since Victorious until now. I love her vocals, her style, her personality and just everything."

The Instagram star, who has yet to meet Ariana, has also nailed one of her idol's trademark styles. She shared, "Achieving her signature ponytail is what makes me resemble Ariana the most. Also her makeup and poses—but the hairstyle is the most important factor."

Kim Kardashian isn't the only member of her family with a doppelgänger. Like her older sister, Kendall Jenner has a look-alike named, Kate Bogucharskaia.

From the brunette locks to the high cheekbones and pouty lips, the Russian model is a dead-ringer for the Keeping Up with the Kardashians star.

Angelina Jolie is without a doubt one of the most beautiful women in the world. With the power of the Internet, we have discovered that the actress has more than one look-alike – model Mara Teigen.

According to her Instagram, Mara is signed to Wilhelmina Models and she has more than half a million followers on the social media app.

Red lips (check). Blonde hair (check). Best friend squad (check). Taylor Swift's fan Olivia Sturgiss had the chance to meet the music superstar after her BFF posted a side by side image of the teen and Taylor on her Tumblr.

Olivia couldn't have been more excited after meeting her celebrity twin after Taylor invited her to a show. “Met Taylor Swift on 11th December 2015, and it was the greatest moment of my life," she said.

Ellinor Hellborg of Sweden has a talent with makeup, and her Adele-inspired look had her social media followers looking twice!

Bradley Cooper's look-alike comes in twos! Twins Matt and Scott Katzenbach are constantly mistaken for the movie star. During an interview with Page Six, Matt said that he never pretended to be The Hangover actor, but he will accept the perks.

"Now it doesn't matter where I go. I went to the Sky Bar [in Bangkok] where they actually shot The Hangover 2 and was greeted, 'Oh Mr. Cooper, great to see you, come right in.' Then tons of people were just flooding and taking pictures... It was totally surreal."

And the award for best celeb twinning moment goes to, Russia's Roman Burtsev, a security guard who has been touted as resembling "an overweight DiCaprio."

Roman was even apparently putting his fame to work by starring in a reality TV show, where he'd be transformed into a Hollywood star by getting fit and taking part in recreating some of Leonardo's most famous movie moments.

With the smooth contouring and straight dark hair, it really should come as no surprise that Toronto's Kamilla Osman looks just like the reality starlet.

When it comes down to style, Kamilla has taken a lesson from selfie queen Kim, opting for neutral colors and earth tones for her everyday look.

You have seen Taylor's young look-alike, now take a look at the vintage version! Reddit user Christmaspencil had us all amazed after sharing a throwback picture of their grandmother who looks just like the 1989 pop star.

The user shared the pic with the caption: “When your Grandma looks like Taylor Swift.”

This Leo look-alike is bringing all of the nostalgia. Swedish bartender Konrad Annerud has gained tens of thousands of Instagram followers due to his uncanny resemblance to the Oscar winner during his Titanic days.

The fact that he looks just like 1990s icon comes with one downside. “It can be quite annoying sometimes when people call me ‘Leo’ instead of my real name," Konrad said.