Growing up, we all had our favorite bedtime stories that we looked forward to hearing — stories we wanted to hear over and over again. Whether it was a story that transported you to other worlds or taught valuable lessons about life, children’s books are what begin a lifelong love of reading.

A number of celebrities have teamed up with talented illustrators to create new books for families to add to their nighttime reading list. If you’re on the hunt for new stories and heartfelt messages that your young ones can enjoy, these children’s books by celebrities are the perfect choice.

***Scroll down for infographic

Stories about chasing your dreams

Santiago the Dreamer in Land Among the Stars by Ricky Martin 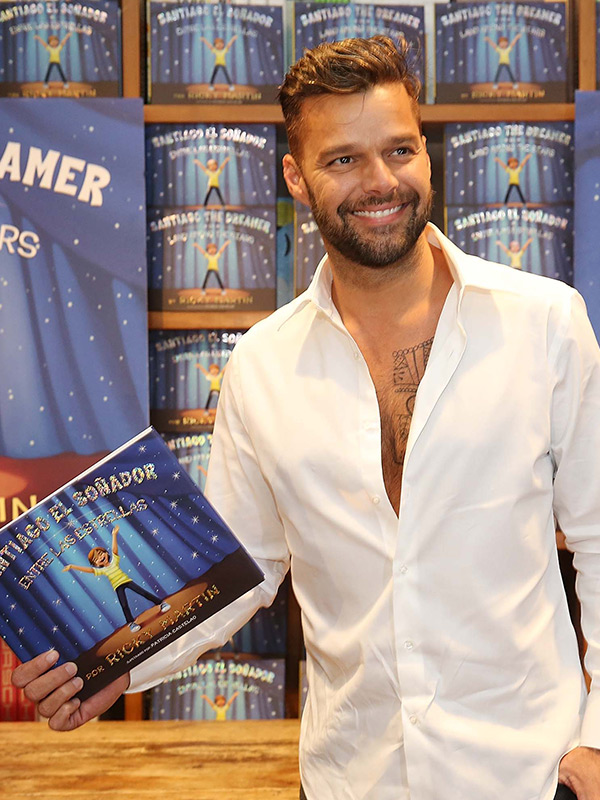 Much like Ricky Martin himself, the character Santiago in Santiago the Dreamer in Land Among the Stars is a young boy who dreams of performing on stage. But when he doesn’t get the leading role in his school play, Santiago begins to doubt himself and if he can achieve his dreams. Encouraged by the words of his father, “Never give up. You can do anything you dream of, as long as you do it with love. And no matter what you choose, always reach for the moon!”, Santiago practices every day as if he got the leading role — and ends up taking the stage! Ricky’s book ends with the famous lesson that when you reach for the moon, you can still land among the stars. 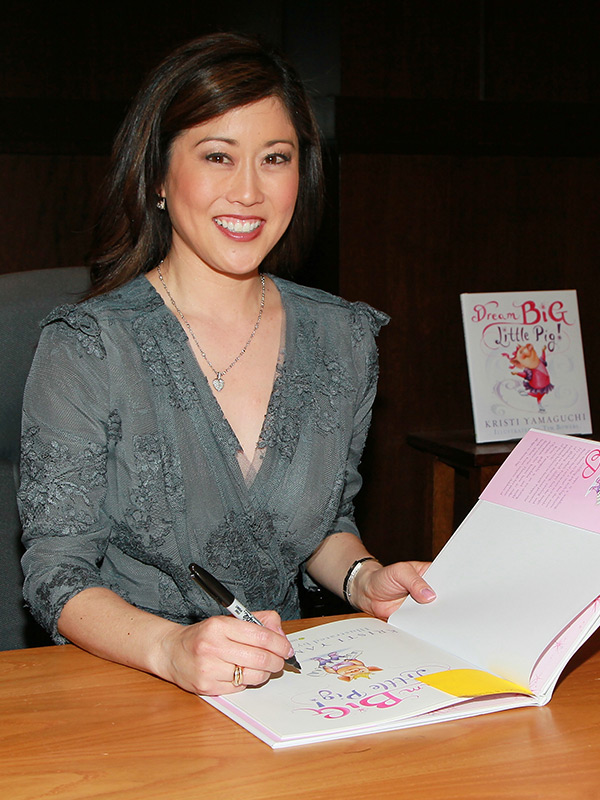 Olympic figure skating champion Kristi Yamaguchi published her debut children’s book in 2011 with illustrator Tim Bowers. This adorable story features Poppy the pig, who dreams of becoming a star. Poppy’s family encourages her to follow her dreams and never quit, even when she’s ready to give up. Success isn’t something that happens overnight and that’s exactly what Poppy can teach children everywhere. Kristi herself lives by the motto “always dream,” which is something she has tried to instill in the hearts of her children, and Dream Big, Little Pig! is a way for her to instill that same message into the hearts and minds of kids everywhere.

Out of the Ballpark by Alex Rodriguez 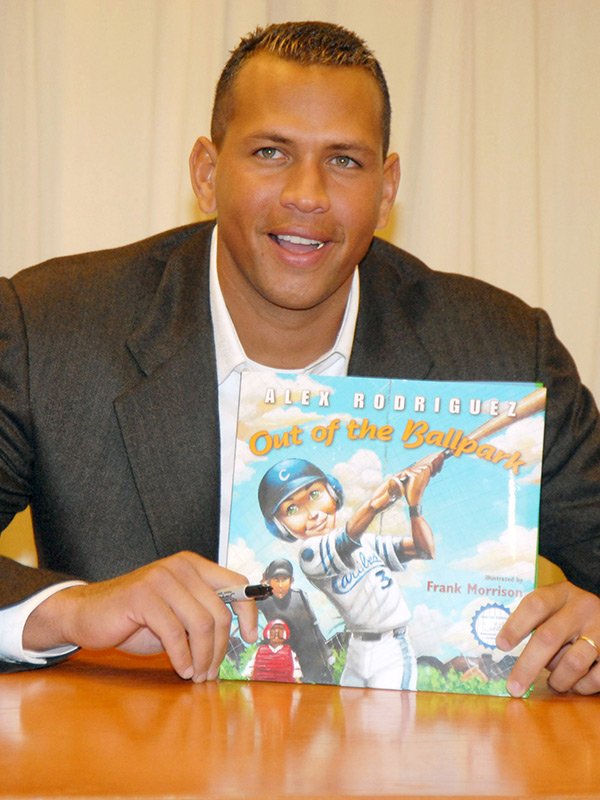 Before he became one of the biggest names in baseball (and before becoming J.Lo’s soon-to-be hubby), Alex Rodriguez was a kid with a dream. Alex drew from his own experiences to write Out of the Ballpark, which tells the story of a young boy, also named Alex, who is determined to help his team win their local baseball championship. Despite the team advancing, Alex is disappointed in his performance and pushes himself to practice even harder before the big game. Even though he feels like his practice wasn’t enough, young Alex ends up hitting a grand slam and winning the championship. A-Rod leaves children with the message that even when things aren’t going great, the power of teamwork and staying committed to your goals will help you accomplish anything.

Stories about belonging and identity 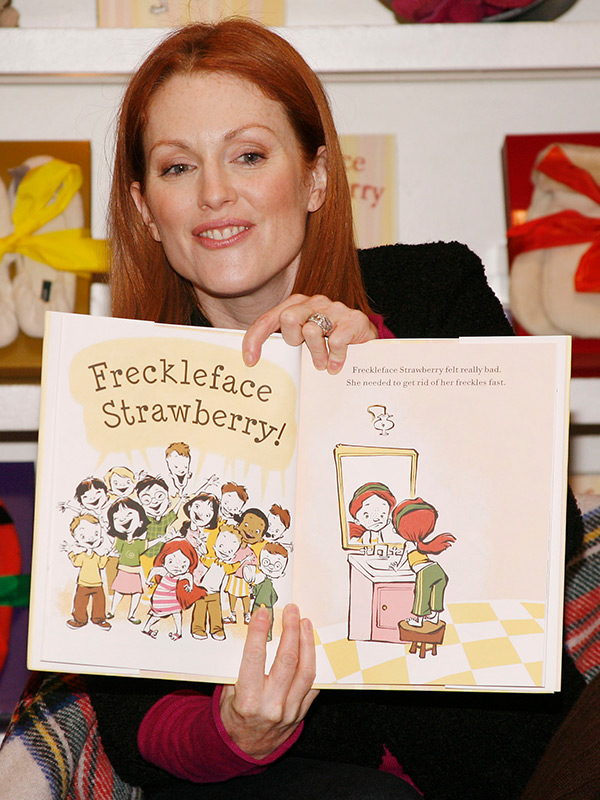 There has likely been a moment in every person’s life where they felt like they didn’t fit in. Maybe you are from a different place, talk differently, or look different. That’s how Julianne Moore’s young character feels, who feels self-conscious about her titular freckleface. Julianne actually based the character on her own experience growing up with red hair and freckles, and wrote Freckleface Strawberry to help other red-headed kids feel less alone. At the end of the story, Freckleface Strawberry realizes that her freckles make her different, but everyone is different and important in their own way.

Girls Hold Up This World by Jada Pinkett Smith 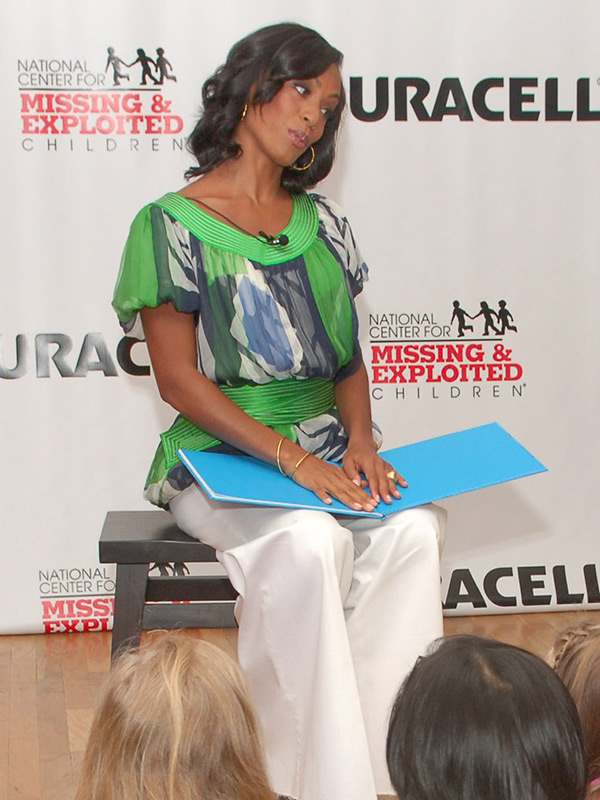 This picture book by Jada Pinkett Smith with photographs by Donyell Kennedy-McCullough is perfect for any parent or teacher looking to teach children about the strength of women. Winner of the NAACP Image Award for Outstanding Literary Work in Children’s Literature, Girls Hold Up This World is a short poem on how girls of every color, shape, and background are strong and beautiful. With so much negativity around body image, it’s important to teach girls at a young age that everybody is beautiful, and this book is the perfect way to begin that conversation. One of the most powerful lines from this book says, “We are sisters of this Earth — members of one powerful tribe. Every color, shape, and size, we’re united by beauty inside.” 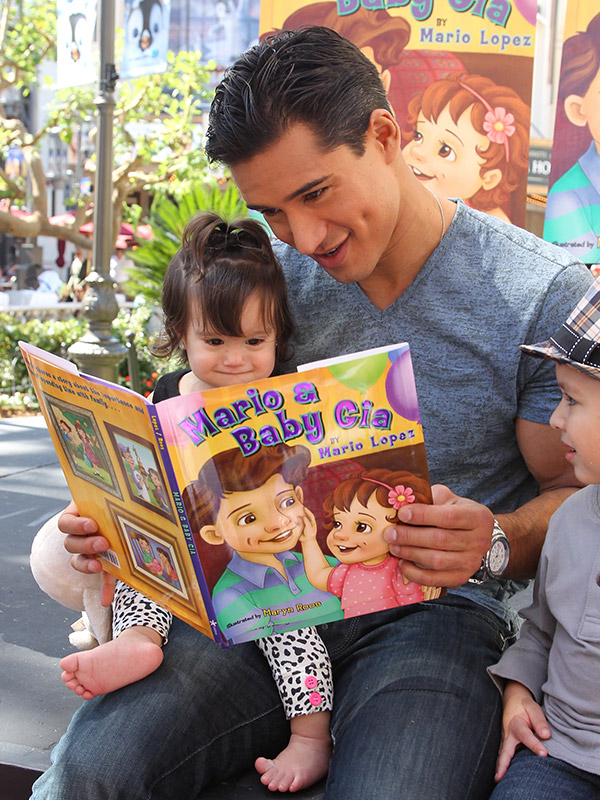 We’ve all faced situations where we’ve been exhausted, frustrated, and ready to throw in the towel. That’s how young Mario feels in Mario and Baby Gia, a story about a young boy whose grandmother asks him to watch his young cousin Gia. In this story by Mario Lopez, the young character sharing the same name quickly realizes that entertaining a young toddler can quickly become quite a handful, and leaves him feeling frustrated. When young Gia asks Mario to tell her a story, he tells her about all the adventures he’s shared with their cousins. By the end of his story, Mario realizes that while it may have been a difficult situation, Gia is his family, and family can overcome anything. 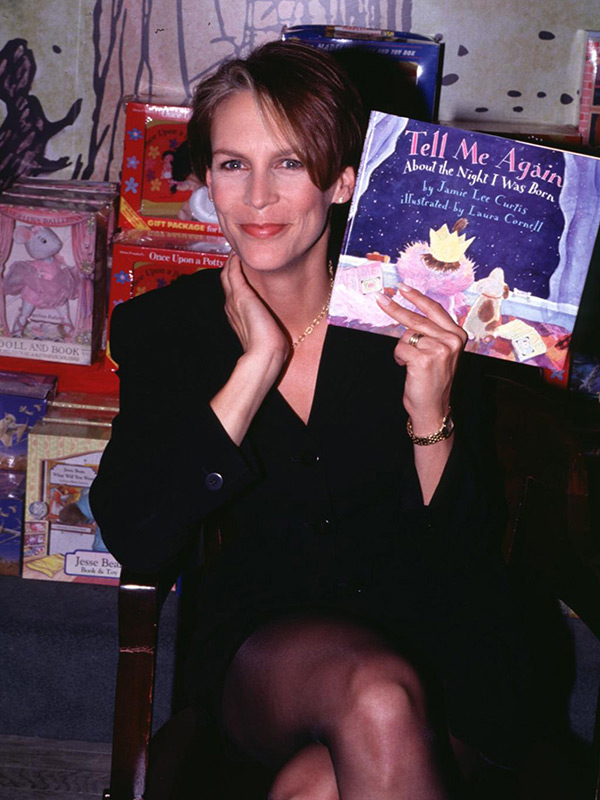 Jamie Lee Curtis has been gracing our screens for more than 40 years, but she has also graced the literature world with her moving children’s picture books, with illustrations by Laura Cornell. The duo are now a New York Times bestselling team, and their tender story Tell Me Again About The Night I Was Born is a celebration for families and adopted children. The young girl in the story asks her parents to tell her about the night of her birth, and Curtis addresses the ins and outs of adoption in a bright and caring way. While no two adoption stories are the same, this children’s book can serve as a springboard for conversations with young adopted children and the special place they have in their home.

Stories to help with learning

Of Thee I Sing: A Letter to My Daughters by Barack Obama 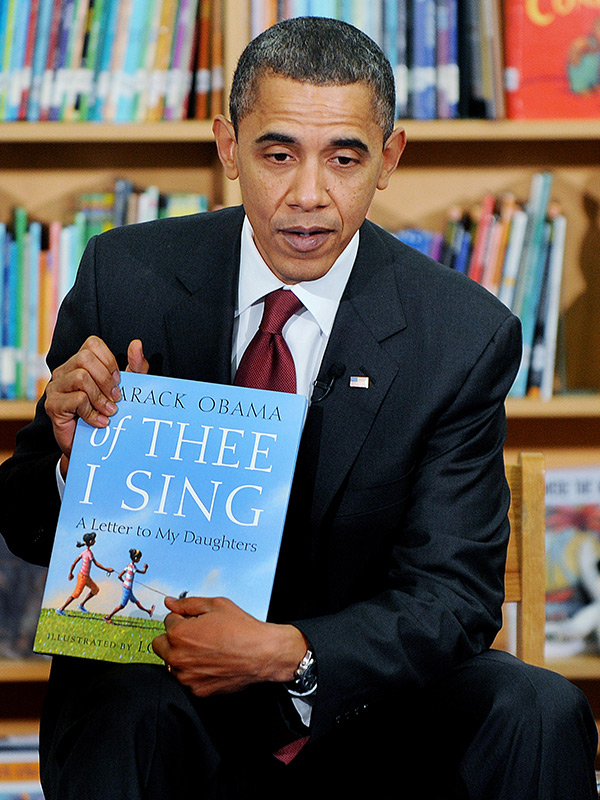 Former President Barack Obama writes a letter to his daughters, Malia and Sasha, in this touching story of Americans who have shaped the United States for the better. Illustrated by Loren Long, Of Thee I Sing tells the story of famous Americans such as George Washington, Neil Armstrong, Cesar Chavez, and Jackie Robinson who represent the highest quality of character and show how great our nation can be. Throughout the book, Barack poses questions along with each story, such as “Have I told you that you don’t give up?” and “Have I told you that you are the future?” Not only is this book a great way to teach young children about some of the most historic people in U.S. history, but a way to inspire them to be the best people they can be.

Everything is Mama by Jimmy Fallon 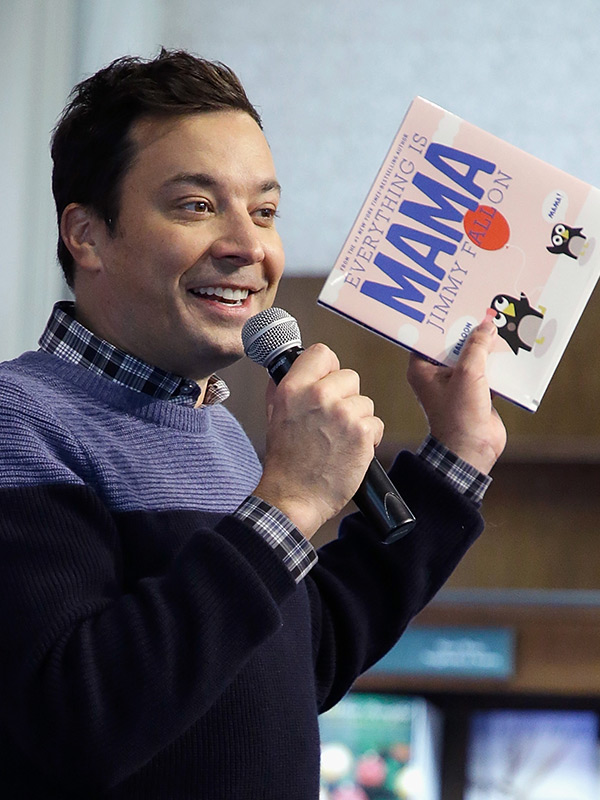 Everything is Mama is a follow-up to Jimmy Fallon’s first children’s book Your Baby’s First Word Will Be Dada. The New York Times best-selling author and late night show host teamed up with illustrator Miguel Ordóñez to create this adorable story about various baby animals who call everything “Mama.” Whether it’s shoes, a bowl of noodles, or even the moon — these youngsters are still learning everything about the world around them. The book ends with a sentimental message from mothers to their kids, “Everything is Mama, according to you. But one day you’ll see Mama’s everything is you.”

River Rose and the Magical Lullaby by Kelly Clarkson 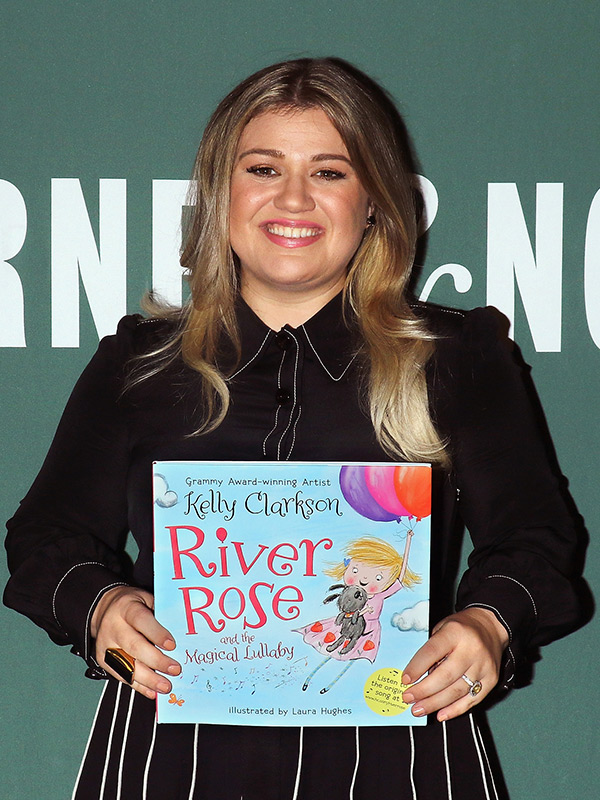 In an enchanting story based on her own daughter named River Rose, Kelly Clarkson’s debut picture book is a fun tale that is sure to delight. Illustrated by Laura Hughes, River Rose and the Magical Lullaby is a story about a young girl who is too excited to sleep the night before her big trip to the zoo. Her mother sings her a lullaby, which is actually available online for readers to listen to, and is performed by Kelly herself. River Rose’s dream takes her on an adventure with all of her favorite animals at the zoo, and even her pet dog named Joplin. In the final line of the book when River Rose returns from her dream and finds herself safe in bed, she says “That was a great adventure — but home is my favorite place!” This message lets children know that while there may be plenty of wonderful things to see in the world, there truly is no place like home.

The Book with No Pictures by B.J. Novak 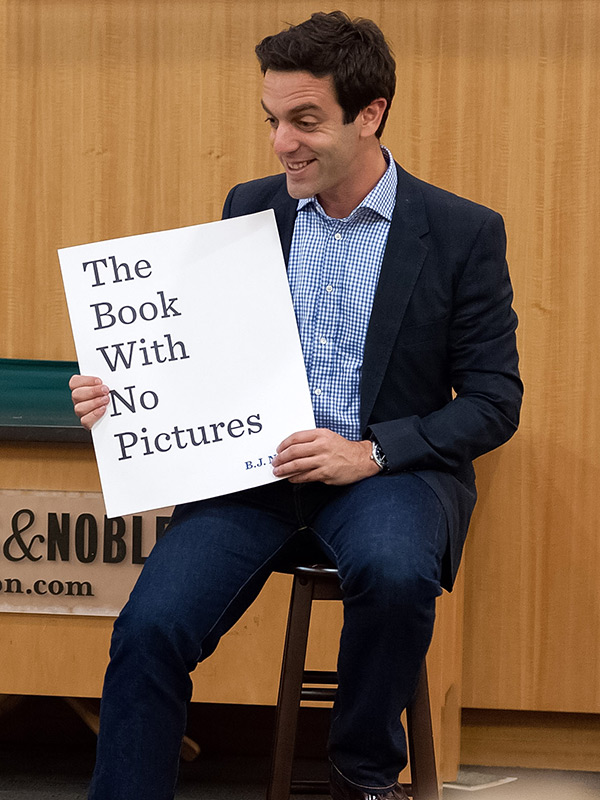 While B.J. Novak’s debut children’s book may not have any pictures — a unique concept for a children’s story — it does not have any shortage of entertainment for young readers. B.J. begins this book by saying “Everything the words say, the person reading the book has to say. No matter what.” The lack of images is made up for with bright and colorful typography, with ridiculous (and made-up) words like “BLORK!” and “Blaggity-blaggity!” With B.J.’s rule that the reader must say everything out loud, it becomes quite a crowd pleaser for children to hear their parents and teachers say all the hilarious phrases from The Book with No Pictures.

Books are a great way to create a special bond between adults and children. You can share in adventures to magical places or be by their side as they learn to read and discover the magic of written words. These children’s books by some of your favorite celebrities are the perfect way to help develop a wonderful sense of imagination, prepare kids for real-life situations that they might face, and inspire them to chase their dreams.