Hugh Jackman made our hearts melt on Tuesday when he posted a selfie – one that co-starred a baby penguin! The actor couldn’t contain his excitement as he snapped the picture of the tiny marine animal as it wandered around in the background.

Aware that he hasn’t yet mastered the art of the selfie, the Les Misérables actor wrote: “I know, I know… My selfie skills are terrible but just look at this baby penguin and everything will appear better!” 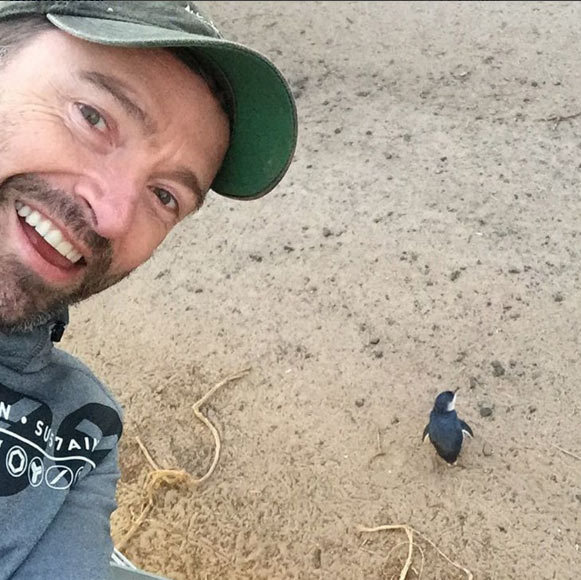 Hugh Jackman melted hearts when he shared this adorable pic of himself with a baby penguin Photo: Instagram/@thehughjackman

This isn’t the first time during the festive holiday that the 47-year-old has been snapping selfies. The actor has posted several shots of himself out and about in Australia enjoying Christmas activities.

Last week Hugh made his 4.3 million followers laugh as he attempted to take a selfie featuring his Christmas tree. Hilariously his failed festive pic cut off the bottom of his head and only captured the lower part of the tree. Making light of the situation, and his poor photography, skills he captioned the shot, “Hahahaha #NiceFramingJackman.” The actor entertained his fans with this failed selfie Photo: Instagram/@thehughjackman

The actor is currently in his homeland enjoying the holidays after finishing his musical show, Broadway to Oz. Although he loves his work, for Hugh, Christmas is all about family and spending time with his two children Oscar, 15, and Ava, 10.

Talking to Parade magazine about raising his kids, the actor expressed how important it is to him and his wife, Deborra-Lee Furness, to keep their children grounded. “We worry a lot,” he admitted. “I constantly talk to them about respect and gratitude. I say ‘Unfortunately, I’m going to be tougher on you than I would be if I wasn’t famous, because people are actually going to be less tough on you in life.’

“In a way they have to be better behaved, be more respectful, have more gratitude than other kids. I try to keep their life as down-to-earth as possible, I really do,” he added.