Adele broke the Internet with the release of her hit single "Hello" and now her new bodyguard Peter Van Der Veen is sending Twitter into a frenzy with his handsome good looks.

Numerous Twitter users, including fashion blogger Bryanboy, who has more than 500,000 followers, gushed about on the Dutch man’s chiseled jaw and toned physique when he was spotted protecting Adele during her recent press tour in the States.

Hello adele's bodyguard, it's me pic.twitter.com/XbR6Mj2KO5


This isn’t the first time that we have seen the dashing bodyguard. He worked for Lady Gaga for 5 years until earlier this year. The two became very close during their time working together and Peter even contributed background vocals on the song "Government Hooker" from the album Born This Way.

As well as protecting famous singers, Peter used to be somewhat of a celebrity himself, when he was crowned Mr. Europe 2005 in a bodybuilding competition.

As for Adele, the singer appears to be unstoppable at the moment. She smashed all previous records selling 3.6 million copies of her new album 25, in less than a week. Incredibly the 27-year-old has also broken the record for the most albums sold in 2015, a title previously held by pop megastar Taylor Swift and her album 1989, which boasted sales of over 1.8 million units sold. 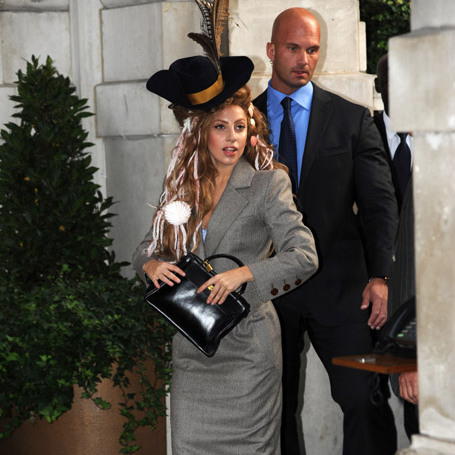 Although the singer insists that she is "overwhelmed" by the positive response to her album, she shouldn't have had doubts. Her previous album 21 spent 24 weeks on top of the Billboard 200, which was the longest ever for a female artist.

To make her fans even happier, the mom-of-one has also just announced that she will be going on tour in 2016. Revealing the big news on her Instagram page, she posted a video admitting that she had been "bluffing" about not going on tour.

It has been five years since the Oscar winner last toured. In 2011 she held a few concerts after the release of her album 21.