Matthew McConaughey may have won an Oscar, but his wife Camila Alves got her long-awaited recognition: becoming a U.S. citizen. She moved to Los Angeles when she was 15, but the Brazil-born model can now officially call America her home. She recently said her Pledge of Allegiance and has become an American citizen.

Camila announced her news on Twitter, writing: "Happy to say I now hold an American passport! I have so much respect and appreciation for this country. #newuscitizen."

The 33-year-old also uploaded a photo of her beautiful family posing in the courtroom – her husband Matthew and the couple's three children Levi, Vida and Livingston.

Happy to say I now hold an American passport! I have so much respect and appreciation for this country. #newuscitizen pic.twitter.com/S58HJMjz81

Camila and Matthew donned casual summery outfits, with the proud mom wearing a white top and jeans and a long yellow crochet cardigan. Her Texan hubby kept it relaxed in a baseball hat, yellow shirt and beige trousers.

The couple, who married in 2012 in Austin where the family currently live, had dressed up their children in smarter gear. Their eldest son Levi was suited and booted in a pale grey jacket, while Vida wore a cornflower blue summer dress.

Matthew, 45, shared the same photo on Twitter and lovingly posted, "Congratulations Camila on getting your U.S. citizenship today – another fellow and great American." 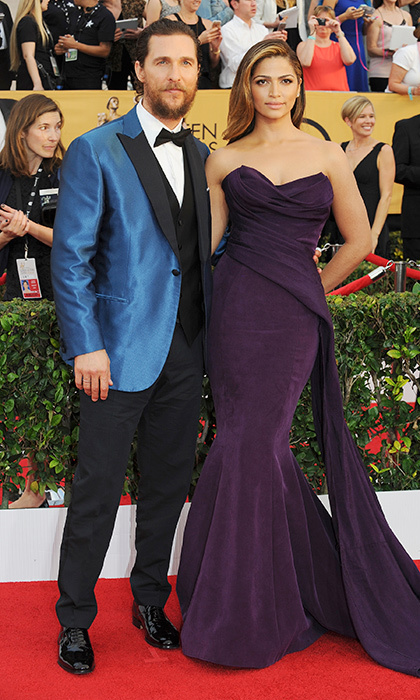 "I was cleaning houses and working restaurants," said Camila of her move from Brazil to the US Photo: Getty Images

The brunette beauty visited her aunt when she was a teen and decided to stay for good. She worked as a maid and waitress for four years, and after learning English she embarked on her successful modeling career.

"My father always told me, 'Before you become a queen you have to learn how to take care of your own things,'" Camila has previously told The View. "So I knew how to do all of it, but I had never really done it on a daily basis. So I was cleaning houses and I started working restaurants."

She met her future husband Matthew in 2006 and after 5 years together, the Dallas Buyers Club star popped the question on Christmas Day, in front of their family.

Opening up about his blissful home life, Matthew told Haute Living Los Angeles: "Now I get to wake up next to someone who I know loves me the way she does – my wife – who gave birth to our three beautiful, healthy children. I get to live in a nice place, and I have things to look forward to every day – work, play, and sometimes nothing at all."