Scarlett Johansson may play an action hero in her latest movie but the Avengers: Age of Ultron star says she’s no supermom. On Thursday, the new mom admitted she wouldn’t assume that title while visiting The Ellen DeGeneres Show. After Ellen asked her if she was one, Scarlett’s quick response was, “certainly not. No.” 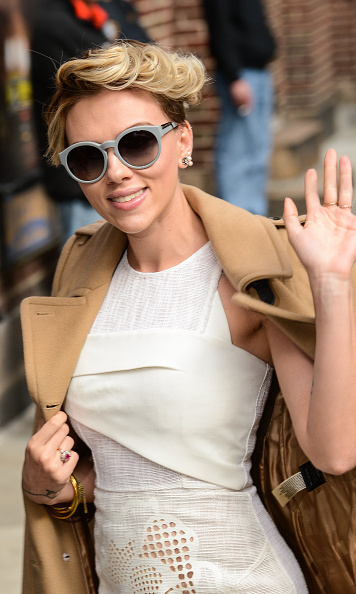 Scarlett, 30, gave birth to her first child in September and filmed the Avengers while she was pregnant. “I was really happy to be working. I never thought I would be working in that condition,” Scarlett said, who was lucky enough to avoid morning sickness.

For a pregnant woman, Ellen noted that Scarlett appears remarkably trim in the film. “How did you hide that?” the talk show host asked. “It just magically went away,” replied Scarlett, who is married to French art curator and journalist Romain Dauriac. The couple divide their time between the US and France. Their daughter, Rose Dorothy, was born in September and is now nearly 8 months old.

This is Scarlett’s second marriage. In 2008, she married actor Ryan Reynolds, who is now happily married to Blake Lively, but the pair divorced in 2011. In an interview published over the weekend, she alluded to why their marriage didn’t work out. “[Marriage] takes a lot of work,” she said in the April 23 issue of Parade magazine. “It takes a man who’s not only confident in the love that you have for one another, but confident in what he has going on in his own career. He has to be in a field that’s completely different from yours. My husband’s also involved in art. What’s important to him is the recognition that he gets from his job, and that has nothing to do with my job.”

Scarlett appeared on Ellen with Avengers co-star Chris Evans, who also plays Captain America. Just as Scarlett told Ellen how she knows Chris “very well. Too well I’m sure,” the actor sneaked behind her, making her jump out of her seat.


Scarlett is also able to joke about her status as a new mom. In a new promo for her upcoming appearance on Saturday Night Live, she can be seen guzzling wine and sobbing, “She so beautiful. She’s like this whole new person.”

Humor aside, she has also shown a more serious side of late, starring in a new public service announcement for Feeding America, a hunger relief organization. The ads are designed to raise awareness and support for the nation’s food banks. The issue is particularly close to Scarlett’s heart, having grown up on assisted lunch programs.

“My family grew up relying on public assistance to help provide meals for our family,” said Scarlett in a press release to HELLO! from Feeding America. “Child hunger in America is a real and an often overlooked problem, but one that together, we can fix. It is my hope that by joining with Feeding America, our awareness of this issue will lead to a solution.”