When Emma Watson was finally able to share the news of her starring role in Beauty and the Beast, the thrilled actress said that her heart was "bursting." Her high emotion was clearly reflected in the first on-set selfie that her co-star Josh Gad posted on Instagram to his 179,000 followers.

The funny photo, which showed an excited-looking Emma pulling a face in the middle of the snap, included Josh and fellow co-stars Dan Stevens, Luke Evans and Kevin Kline. "Can't wait for you to be our guest," wrote Josh, who plays Gaston's sidekick Le Fou in the new adaptation.

Can't wait for you to be our guest.

Josh's caption was a reference to the Disney film's well-known song, "Be Our Guest." Emma confirmed in January that she would be playing Belle in the new film, set for release in 2017.

The English actress wrote on her Facebook page, "I'm finally able to tell you… that I will be playing Belle in Disney's new live-action Beauty and the Beast! It was such a big part of my growing up, it almost feels surreal that I'll get to dance to 'Be Our Guest' and sing 'Something There.'"

She added, "My six-year-old self is on the ceiling – heart bursting. Time to start some singing lessons. I can't wait for you to see it. Emma xx." 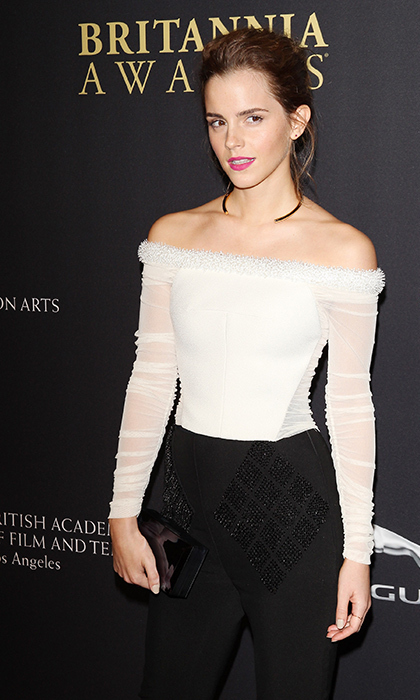 Emma Watson said the Disney film was "such a big part" of her childhood Photo: Getty Images

The former Harry Potter actress will star opposite Dan, who plays the Beast, while Luke takes on the role of Belle's pursuer Gaston.

Emma shot to fame at the age of 11 thanks to her role as Hermione Granger in the Harry Potter series. In recent years Emma has received acclaim for films including The Perks of Being a Wallflower and The Bling Ring.

The 25-year-old has also made headlines for launching the HeForShe campaign – a solidarity movement for gender equality that "brings together one half of humanity in support of the other." As a UN Goodwill Ambassador for Women, Emma has long championed the issue and called on men and women from around the world to support her cause.